Oscars 2017: These Brutally Honest Trailers Will Make You Laugh 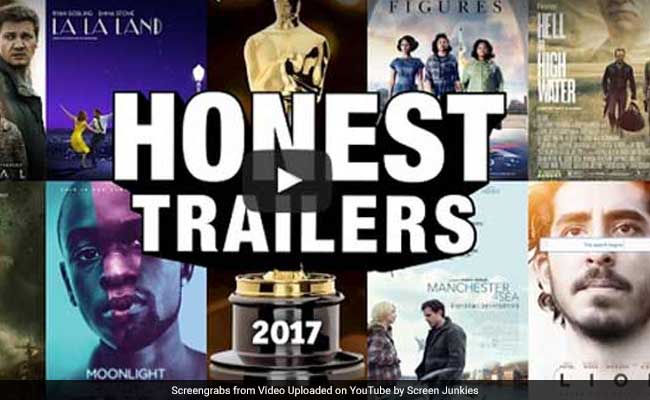 It's awards season and the 89th Annual Academy awards, more commonly known as the Oscars, will be held on Sunday, February 26. Nine films are in the running to win Best Picture, including: Arrival, Lion, Hell or High Water, Hidden Figures, Manchester By the Sea, Moonlight, Fences, Hacksaw Ridge and La La Land. But why have these films really been nominated? And more importantly, who has watched them all? YouTube channel "The Screen Junkies" pokes fun at all nine films in their latest video, part of their popular "Honest Trailer" series. Since being uploaded, the video spoofing the contenders has racked up over 2 million views.

Or as the trailer suggests: "Amy Adams' second film this year about trying to relate to an alien that no one gets along with." Yes, that was a snide reference to Batman v Superman: Dawn of Justice.

You know, the one with Dev Patel.

A film "so entertaining, straight-forward and unpretentious it has no chance of actually winning." Oops.

The film that "won't make white people feel too bad about themselves."

5. Manchester By the Sea

"A non-stop grief train to Sadsville." Nailed it.

The film that met all the requirements needed to win an award.

The one in which "actors bravely explore how much acting you can fit into one movie."

The Mel Gibson film "filled with tonnes of blood and gore."

Because "the Academy just can't resist a movie about how special the movies are, can they?!"

The glitzy awards ceremony will be held at the Dolby Theatre in Los Angeles, California. Which film do you think will win Hollywood's highest honour? Let us know in the comments section below!

Gujarat Forest Staff Find Lion Cub In Net, Risk Their Lives To Save It. Watch