On Camera, Woman Climbs Inside Zoo Exhibit, Taunts Lion. Then...

A video shows her holding her arms out to the lion 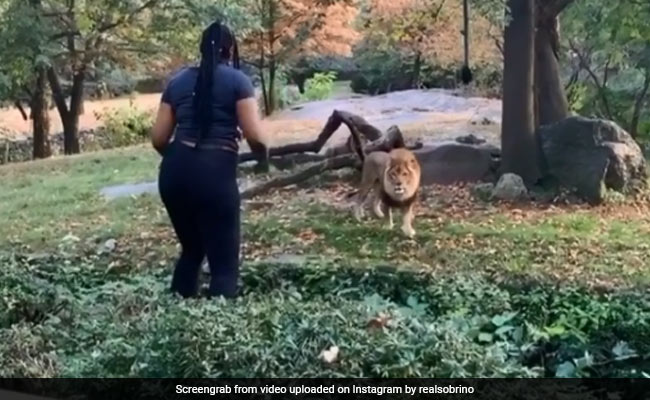 A woman was filmed entering the lion enclosure at Bronx Zoo.

The woman climbs over the fence as other zoo patrons protest.

"You're not supposed to do that," a man says three times, in a video uploaded Saturday to an Instagram account that appears to belong to the barrier-jumper herself.

But the woman keeps going. She steps through foliage to face the lion, which stares at her from across a moat as she waves. She holds her arms out at the animal and shakes her body. Other short clips from the same account and from a bystander's Instagram show her wiggling her fingers, dancing and at one point telling the animal, "Baby! I love you!"

"I REALLY HAVE NO FEAR OF NOTHING BREATHING" a caption on one of the woman's videos declares.

Commenters chimed in with disapproval and derision.

"Please don't cross barriers for videos," one wrote. "I'm so glad your CARELESS actions didn't harm this animal," said another.

The Bronx Zoo seemed equally aghast at the incident. It says it received a report on Saturday that someone had climbed over a "visitor safety barrier" at its African lion exhibit.

"This action was a serious violation and unlawful trespass that could have resulted in serious injury or death," the zoo said in a statement, adding that it has a "zero tolerance policy" for such behavior.

New York Police are now investigating a report of criminal trespass. As of Tuesday night no arrest had been made, according to a department statement.

The Washington Post could not reach the unidentified woman in the videos for comment, and zoo spokesman Max Pulsinelli declined to provide more information on the incident Tuesday.

How the woman ended up leaving the lion exhibit is unclear. Videos suggest her fence-hop elicited alarm but little immediate action from bystanders.

"Can you tell her to get back?" an onlooker asks well into the woman's gestures toward the lion, which stands mostly still after taking a couple steps in her direction.

"It's probably not safe," another adds.

People visiting the New York zoo later this week were similarly concerned by the rogue woman's actions. Some worried that her misconduct could have repercussions for future guests.

"At this exhibit, there's low walls, so you want to get close enough to see what's going on, but you don't want to have these high fences in front of all the exhibits," a man named John Rubbo told CBS New York. "It takes the fun out of the zoo."

Stories abound of overeager visitors whose quests to get closer to zoo animals have landed them in trouble.

Just last week, a North Dakota woman pleaded guilty to trespassing after jumping a rail to touch an ape and take a selfie; she received a $300 fine and about a year of probation. The Bronx Zoo, too, has seen other incidents of guest trespass - sometimes with dire consequences.

Back in 2012, a 25-year-old was mauled after leaping from a monorail train into the den of a Bronx Zoo Siberian tiger, according to NBC New York. Staff rescued the man after distracting the animal with fire extinguishers - but not before the visitor suffered wounds to his arms, legs and back in addition to broken bones seemingly incurred from his jump.

More recent incidents at the Bronx Zoo have been less grisly. In 2016, police detained two people over two days for venturing into off-limits areas, CBS New York reported. One man climbed a railing toward a snow leopard enclosure, while a woman blew past signs to the back of an exhibit to take pictures, police told the news station.

The woman got a court summons for trespass, according to police. The man did not face charges - though he did lose his season pass.