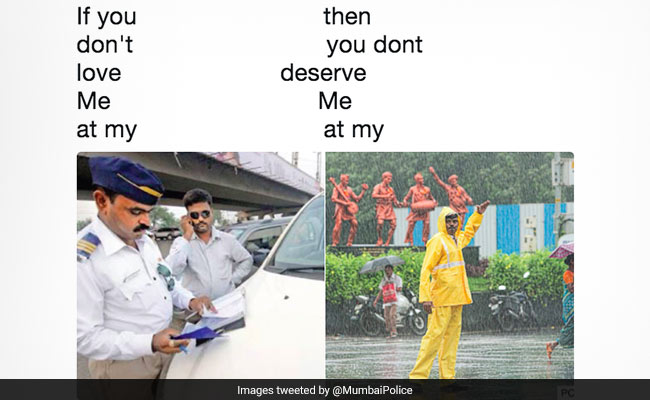 Mumbai Police has proved yet again that their Twitter game is totally on point - this time with a masterstroke in the form of a new tweet. The official handle recently posted their version of the now-famous 'If you don't love me at my worst, you don't deserve me at my best' meme. Posted just three hours before writing this, the tweet has collected over 6,600 'likes' and more than 2,900 retweets - and still counting.

For the uninitiated, the 'If you don't love me' meme comprises two pictures to show a transformation of sorts. The quote used with the images is often misattributed to Marilyn Monroe. The meme has taken over the Internet and Mumbai Police, known for their amazing and on-point tweets on all things topical, hopped on the bandwagon.

Here's what Mumbai Police has tweeted:

If you then
don't you dont
love deserve Me Me
at my at my pic.twitter.com/XUaxxTdfuv

Along with all the 'likes' and retweets, the meme has collected quite a few reactions.

Promoted
Listen to the latest songs, only on JioSaavn.com
"Whoever is making these deserves a raise," says one Twitter user. "Memebai police," says another.

Just days ago, a version of the meme featuring actress Mindy Kaling was noticed by, who else, Mindy herself. She had the most epic response to being meme-ified.

if you then
don't you dont
love me deserve me
at my at my pic.twitter.com/uxSfuH3Bx2

I don't get this, I'm equally pretty in both https://t.co/JBZIEnrfTu

Tell us what you think of the memes in the comments section.Click for more trending news