Meet Tripat Singh, The 76-Year-Old Whose Fitness Journey Has Left The Internet In Awe

In addition to being a fitness enthusiast, the septuagenarian is also a vegan 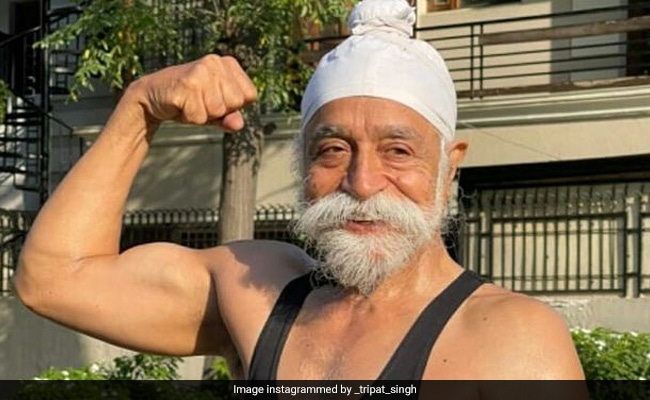 Tripat Singh's inspiring story was shared by Humans Of Bombay.

While most of us feel tired by just thinking of our next workout session, a 76-year-old is winning the Internet with his jaw-dropping fitness videos. Proving that age is just a number, Chandigarh's Tripat Singh has gained the status of an Instagram celebrity thanks to his workout routines. Mr Singh, who has nearly 71k followers on the social media platform, is known for his exercise videos. In addition to this, he also practices a strict vegan diet. While fans of the septuagenarian have known all about his workout regime for a few years now, Mr Singh only recently spoke about his journey to becoming a fitness enthusiast.

Sharing his journey with Humans Of Bombay on Monday, Mr Singh said that it was the death of his wife that led him on this path of self-care. In a video shared by the Instagram page, Mr Singh is seen with a photograph of his wife. The text accompanying the video quotes him as saying, “I'm Tripat and this is my wife, Manjeet. She passed away in 1999, and I was heartbroken without Manjeet. I was depressed for years. Our business dissolved. I became a couch potato.”

Talking about how things changed, he said, “Manjeet would have been disappointed seeing me quit. So I decided to lift myself up in my 60s and train harder to lift myself again. Today I run a successful business. And I'm fitter than I ever was! And I feel my wife's spirit and support in everything I do.”

The footage features Mr Singh performing a variety of exercises ranging from lifting weights, working out using monkey bars and even lifting weights while hanging inverted from a monkey bar. The caption reads, “The comeback is always greater than the setback!”

The 76-year-old's inspirational journey won hearts on the Internet and several users praised his love story as well as the fitness journey. One user said, “That love for his wife though,” while another wrote, “You are an inspiration, sir.” Several others left comments that read “respect” and “awesome” among other things.

Mr Singh's bio on Instagram reiterates his fitness mantra. In it, he writes, “Age is no excuse for fitness. On Vegan diet.” In addition to inspirational videos on fitness, Mr Singh also shares posts on curated exercises that his social media followers can perform as a routine at home.

Take a look at some of his videos here:

Tell us what you think of Tripat Singh's fitness journey.