Meet Louis, Camel Born On Same Day As Royal Baby And Named After Him

Britain's Prince William and his wife Kate named their son Louis. But there's another newborn Louis in the United Kingdom who is likely to become as famous as the little prince. 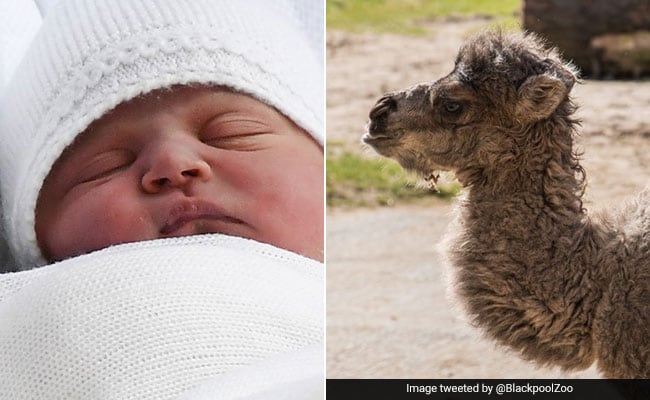 Louis, the baby camel was born on the same day as the royal baby and named in his honour (AFP/Twitter)

Britain's Prince William and his wife Kate have named their baby son Louis, royal officials revealed on Friday. But there's another newborn Louis in the United Kingdom who is likely to become as famous as the little prince. England's Blackpool Zoo announced that a double humped Bactrian camel calf was born around the same time as the royal baby. In honor of Prince Louis, the camel was named after him. Cue the "awws."

"As the world watched and waited for the arrival of the royal baby, we were heralding our very own special delivery," the zoo tweeted less than 24 hours ago.

"A tiny, double humped Bactrian camel calf was spotted by keepers on Monday morning, just as news broke that the Duchess of Cambridge had gone into labour - so we thought it only right that he be named in honour of the new prince," the zoo said, tweeting a very cute photo of the animal.

As the world waited for the arrival of the royal baby, we were heralding our very own special delivery -  a tiny, double humped Bactrian camel calf, born on Monday morning, has now been named in honour of the new Prince Louis!! #RoyalBabyNamepic.twitter.com/ptcWbCV0SJ

Just look at baby Louis trotting about - but staying close to mum, Tibet.

The royal baby's name was announced on Friday.

"The Duke and Duchess of Cambridge are delighted to announce that they have named their son Louis Arthur Charles," said a statement from Kensington Palace, the couple's London residence. "The baby will be known as His Royal Highness Prince Louis of Cambridge," it said.

The name likely pays tribute to William's great-great uncle Louis Mountbatten -  the last British Viceroy of India before independence in 1947 - while Charles is the name of William's father.

But the Daily Mail tabloid pointed out it was also a favourite for French kings and had "a distinctly Gallic royal flavour".

"In a defiant two fingers to Brexit, William & Kate have given their baby a French name: Louis," TV presenter Piers Morgan wrote on Twitter.

The French embassy to London tweeted: "We're delighted that you've been given such a lovely French name!"

Louis is currently only the 71st most popular name for a baby boy in England and Wales.

The Duke and Duchess of Cambridge are delighted to announce that they have named their son Louis Arthur Charles.

The baby will be known as His Royal Highness Prince Louis of Cambridge. pic.twitter.com/4DUwsLv5JQ— Kensington Palace (@KensingtonRoyal) April 27, 2018

The baby was born weighing eight pounds and seven ounces (3.8 kilogrammes) at 11:01 am (1001 GMT) on Monday with William, the Duke of Cambridge, present for the birth.

The couple stepped out of St Mary's Hospital in central London to cheers from a crowd of supporters and global media outlets gathered outside.

Louis is fifth in line to the throne and a sixth great-grandchild for Queen Elizabeth, who turned 92 on Saturday, and her husband Prince Philip.

He will hold the title of prince after the Queen changed the rules in 2012 to ensure that all of William's children would be entitled to the style, not just his eldest son.

Prince Louis is also the first male royal who will not overtake his sister in the line of succession after a reform that ends male primogeniture.

Welcome to the family. pic.twitter.com/nKSd5kh5bZ

Louis Mountbatten was the beloved great-uncle of Prince Charles, and the uncle of the Duke of Edinburgh. He was assassinated by Irish republicans when his boat was blown up on a fishing trip off the coast of County Sligo in the Republic of Ireland.

Louis is also a middle name of Prince George.

Promoted
Listen to the latest songs, only on JioSaavn.com
The birth kicks off a busy summer of royal celebrations, with Prince Harry set to marry US actor Meghan Markle on May 19.