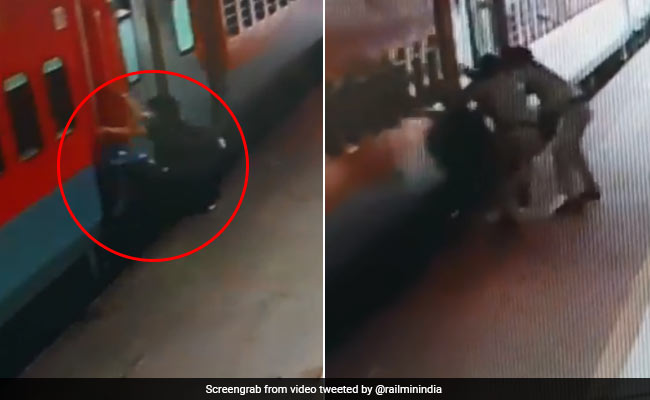 RPF personnel managed to save a man who slipped while trying to board a moving train.

Alert RPF personnel managed to save the life of a man who slipped while trying to board a moving train at the Ahmedabad railway station. On Tuesday, the Ministry of Railways shared a video on Twitter which shows an unnamed man trying to board the Ashram Express train which had already started moving. The shocking video shows the man losing his balance and almost falling off the train as it gains speed.

Fortunately, just as he was about to fall in the gap between the platform and the train, alert personnel of the Railway Protection Force (RPF) spotted him. The video shows two staff members of the RPF rushing to save the man. They managed to push him back into the compartment of the moving train, saving him from serious injuries.

"HOWEVER FIT AND SMART YOU ARE, PL. DONT TRY TO ENTRAIN/DETRAIN A MOVING TRAIN," warned the Ministry of Railways while sharing the video.

Watch the incredible rescue below:

A passenger tried to board moving 12915 Ashram Exp. at Ahmedabad Station but he slipped and was about to fall in between platform & train. He was promptly pushed back into the coach by the RPF staff. HOWEVER FIT AND SMART YOU ARE, PL. DONT TRY TO ENTRAIN/DETRAIN A MOVING TRAIN pic.twitter.com/TwIgK95ZIs

Since being shared online, the video has collected over 12,000 'likes' and more than 1.4 lakh views. In the comments section, many have praised the RPF personnel for being vigilant and saving the man.

Kudos to the vigilant team. Passengers should not take unnecessary risks like this.

Absolutely! Nothing is worth risking your life.
You can get another train but you will not get another life.

In June, a man fell between a moving train and platform at the Jharsuguda station in Odisha. A video of his rescue had gone viral online.