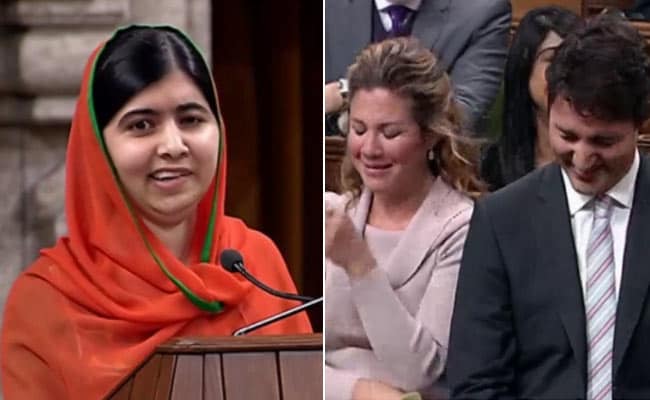 Malala Yousafzai's speech was both inspiring and witty.

NEW DELHI: Nobel Laureate Malala Yousafzai was presented with an honorary Canadian citizenship on Wednesday and left everyone impressed with her address to the Canadian Parliament. The 19-year-old spoke about the importance of educating women, the refugee crises, and much more in her speech. "I want to thank Canada for its passion for girls' education, for its passion for humanity, for refugees, and for standing up for women's rights, and for peace," she said. However, as inspiring as her address was, Malala also made everyone laugh with some of her words during her speech. Especially when she spoke about meeting Canadian Prime Minister Justin Trudeau.

"I was also so happy to meet your Prime Minister this morning. I am amazed by his embrace of refugees, his commitment to appointing Canada's first gender-balanced cabinet and his dedication to keeping women and girls at the centre of your development strategy," Malala said in her speech before referencing to his tattoos and yoga.

"We have heard so much about Prime Minister Trudeau but one thing has surprised me: people are always talking about how young he is," she said. "They say that he's the second-youngest Prime Minister in Canadian history. He does yoga. He has tattoos. And a lot more," she added as everyone laughed and clapped at her words.

She went on to talk about how people around her reacted when they heard she was going to meet Mr Trudeau.

"When I was coming here, everyone was telling me, like, 'Shake prime minister's hand and let us know how he looks in reality,'" she said. "And people were just so excited about meeting Trudeau. I don't think anyone cared about the Canadian honorary citizenship," she said as both the prime minister and his wife blushed.

While Malala's words did make everyone laugh out loud, she continued by sharing a message for children across the world by talking about the young leader.

"While it may be true that he is young for a head of government, I would like to tell the children of Canada: you do not have to be as old as Prime Minister Trudeau to be a leader," she said.

Promoted
Listen to the latest songs, only on JioSaavn.com
Watch her entire speech below. You can also skip to 22 minutes 40 seconds of the video to hear what she said about Prime Minister Trudeau.