"It was probably the closest scrape with death that the leopard has ever been through." 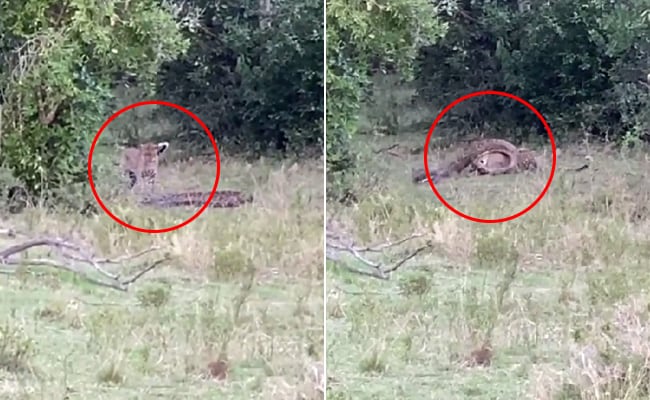 A hair-raising video shows a fight between a leopard and a python.

A rare and unlikely battle took place between a huge python and a leopard at the Maasai Mara Triangle Reserve in Kenya recently. A hair-raising video of the incident shows the leopard and the python initially eyeing an impala nearby, before the python decides to attack the big cat instead. In the end, though, it was the leopard that emerged victorious.

According to Daily Mail, the leopard was initially caught off-guard but soon managed to regain lost ground. A video of the incident shows the leopard leaping into the air as the python tries to constrict it.

"We all had a moment thinking about how terrible it was that we were watching a beautiful leopard get killed. Python constriction is horrible and it was sickening to imagine death from that," said Mike Welton, a tourist who witnessed the fight, according to Unilad.  In the end, he said, the leopard was able to wrestle out "then bite the head of the snake."

"It was probably the closest scrape with death that the leopard has ever been through."

According to Mr Welton, he and his safari tour group were nearby when they heard a commotion and rushed to witness the fight. The 28-year-old called the sighting "rare" and added: "Word travelled around the Mara and of 40 or so guides, who are out there all day every day, nobody has seen this happen before."

In February, a viral video had captured the terrifying fight between a python and an alligator.