Ivanka Trump had visited the Taj Mahal on Monday. 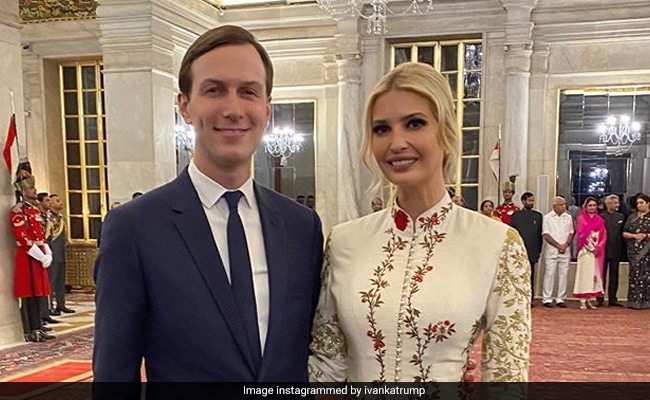 Ivanka Trump had accompanied US President Donald Trump on a 2-day state visit to India.

US President Donald Trump's daughter and senior advisor, Ivanka Trump, was part of the high-powered delegation that accompanied him on a two-day state visit to India this week. Ivanka Trump, 38, treated her nearly 6 million Instagram followers to glimpses from the trip throughout her stay. In her latest Instagram post, she thanked India while sharing a lovely picture from her visit to the Taj Mahal in Agra.

The photograph shows Ivanka holding hands with her husband, Jared Kushner, with the white marble monument looming in the background. It captured the couple in front of the Taj Mahal's reflective pool – the same spot where Amazon founder Jeff Bezos was photographed with girlfriend Lauren Sanchez barely a month ago.

"Thank you India!" wrote Ivanka Trump while sharing the picture.

Ivanka Trump had earlier praised the grandeur of the 17th century monument, describing it as "awe-inspiring".

"The grandeur and beauty of the Taj Mahal is awe inspiring!" she had written on Monday, sharing a series of photographs clicked at the Mughal-era monument.

The grandeur and beauty of the Taj Mahal is awe inspiring!

The US first family, including Donald Trump, wife Melania, Ivanka and Jared Kushner, had visited the Taj Mahal after attending the grand 'Namaste Trump' event at Motera Stadium in Ahmedabad.

An active Instagram user, Ivanka Trump also shared other glimpses from the state visit – including her trip to the Sabarmati Ashram in Ahmedabad and Hyderabad House in Delhi. On Tuesday, she had posted photographs from the dinner banquet hosted by President Ram Nath Kovind at the Rashtrapati Bhavan for the first family. The photos show Ivanka dressed in a white, red and gold anarkali by designer Rohit Bal.

"It was an honor to join President Kovind at a beautiful banquet in honor of POTUS and FLOTUS's visit to India," she wrote while sharing the pics.

Donald Trump concluded his whirlwind 36-hour tour to the country on Tuesday night. During his visit, President Trump spoke about the importance of the United States-India relationship before a crowd of more than 110,000 people in Ahmedabad, before flying to Agra and then Delhi.