While many on Twitter questioned what exactly Ivanka Trump was being thanked for, others accused her of faking the fan mail 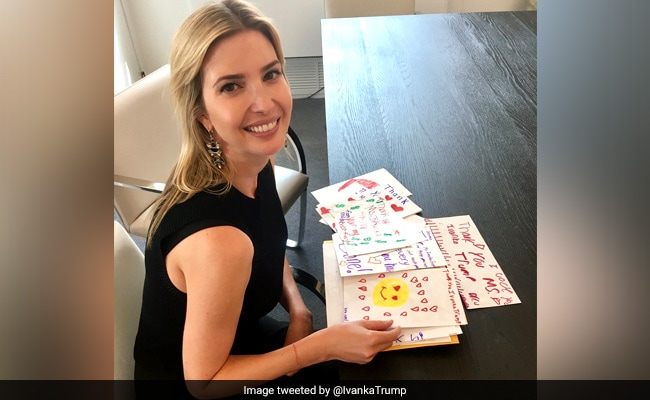 Ivanka Trump's tweet showing off her fan mail seems to have backfired.

A tweet by Ivanka Trump showing off her fan mail backfired spectacularly as Twitter users found not one but several reasons to mock her. The 35-year-old White House senior adviser and US President Donald Trump's daughter took to Twitter and Instagram on Thursday to post photos of herself with letters and pictures she had received - only to get trolled for it. Here's the tweet in question:

Overjoyed by these beautiful letters. Reading them is one of the highlights of my week. pic.twitter.com/AF5tSMHnB6

While many on Twitter questioned what exactly she was being thanked for, others accused her of faking the fan mail as all the letters seemed to be addressed to 'Ms Ivanka Trump' and written using the same marker pens. One sketch in particular grabbed many eyeballs as it depicted a smiley face with green dollar signs for eyes.

Promoted
Listen to the latest songs, only on JioSaavn.com
Some questioned why she was being thanked at all, given that she is not an elected official and constantly battles allegations of nepotism

What do you actually do?

So someone in your family CAN read? Hmph. You're not an elected official, get out of the white house.

What are they thanking you for?

Inquiring minds want to know, Ivanka...what do you do?

All the same markers, using the same colors... is there a crayon shortage?

The one below it is not written by a child. pic.twitter.com/QJ5D5MCL0o

Kal Penn even responded with his own letter

We had a letter for you too! pic.twitter.com/6cm9PklvvQ

And a lot of users focused on this face

we love a role model pic.twitter.com/0R0QoY4xkY

Twitter Reactions To Meghan And Harry's Tell-All Interview With Oprah