On International Women's Day, McDonald's has flipped its iconic golden arches sign upside down as a "celebration of women everywhere." But the Internet isn't particularly impressed with what some call a "cheap PR stunt." 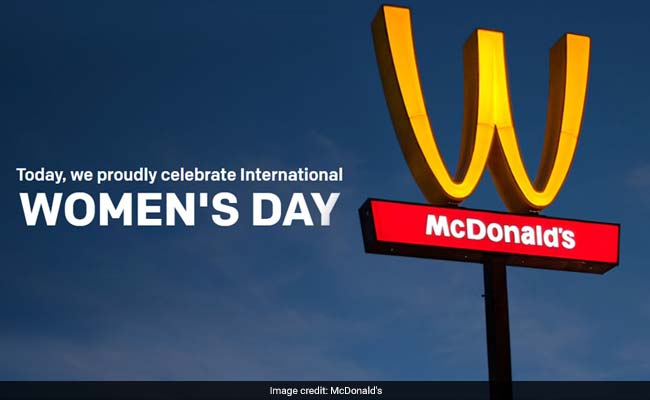 On International Women's Day, fast-food chain McDonald's has turned its iconic golden arches sign upside down as a "celebration of women everywhere." The move has sparked debate on social media, however, with some calling it a "cheap PR stunt." March 8 is celebrated around the world as International Women's Day. According to its official website, International Women's Day "is a global day celebrating the social, economic, cultural and political achievements of women. The day also marks a call to action for accelerating gender parity."

"In celebration of women everywhere, and for the first time in our brand history, we flipped our iconic arches for International Women's Day on March 8 in honor of the extraordinary accomplishments of women everywhere and especially in our restaurants," says McDonald's Global Chief Diversity Officer Wendy Lewis in a statement to the press.

But according to CNN, the arches have been physically flipped only at one location in the United States and will be digitally flipped on McDonald's social media platforms.

The move has had some netizens rolling their eyes at what they call "corporate feminism."

Hey @McDonalds, maybe instead of a cheap PR stunt where you make the M a W to "support" women, you do something real - like paying your workers a living wage. https://t.co/xoOHRvSQdx

McDonalds: In celebration of women we are flipping the arches upside down.

Or you could give your employees better benefits.

Maybe a living wage? Better family leave? A career path forward in the face of automation?

If @McDonalds actually cares about women-how bout:
Paying a livable wage
Providing healthcare to your employees
Hiring Women/minorities in leadership. (Women/Munorities are 70% of your employees but only 35% of your exec team)

Good for McDonalds and their women workers who thought of this.  It's a start.

mcdonalds may have flipped its logo to "celebrate" women but i won't be impressed until they serve pink big macs!

McDonald's is far from the only company to tweak its logo as a part of a female-friendly marketing effort ahead of Women's Day.

Promoted
Listen to the latest songs, only on JioSaavn.com
This month, Diageo - the world's largest spirits company - launched a limited edition Johnnie Walker Black Label Scotch in the United States. Called Jane Walker, the bottle does not feature Johnnie but a striding, top-hatted woman named Jane instead.

In February, PepsiCo was ridiculed after its CEO Indra Nooyi said it was preparing to launch a "low crunch" line of chips, because women "don't like to crunch too loudly in public."Click for more trending news