"I've tried hard to be good but miserably failed. I'll be honest I do deserve coal, but please I'd love to have a present," she wrote. 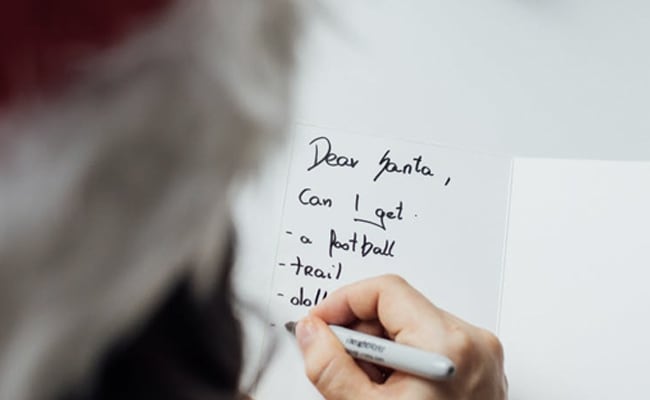 A little girl's letter to Santa Claus demanding several extravagant gifts despite admitting that she "failed miserably" at being good is winning hearts on social media. The nine-year-old girl's elder brother tweeted the wish list, which included a trip to France, a live penguin, an iPhone 12 and a latest computer, among other things.

The schoolgirl from Essex even admitted to not having been on her best behaviour in 2020, saying that she deserves coal but hopes for a present (or 12).

"Dear beloved Father Christmas, I hope you've had a wonderful year and you've been well," she wrote. "My year has been quite the opposite. I've tried hard to be good but miserably failed. I'll be honest I do deserve coal, but please I'd love to have a present."

She went on to list 12 things she wanted, requesting Santa to tick the boxes if he had any of them. Her list included AirPods, a Nintendo Switch, a mobile laptop, a snake and several other items.

Twitter user @AllyTheJedi shared the adorable letter online on Tuesday, writing: "Y'all, look at this letter my little 9y/r sister wrote to Santa." Take a look at it below:

Y'all, look at this letter my little 9y/r sister wrote to Santa????????. pic.twitter.com/yjSQpURjli

The letter is winning hearts on social media, racking up dozens of amused comments.

"I am really kind of shocked she didn't specify the 5 tickets to France had to be business class," joked one Twitter user.

"It's the handwriting and vocabulary for me.. And five tickets to France," another wrote.