At the famous Shiv-Parvati temple in downtown Sigra, the faces of idols have been covered in masks 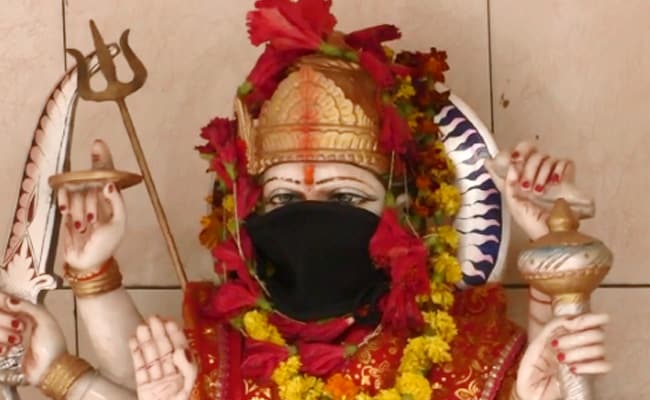 The faces of idols have been covered with masks at a temple in Varanasi.

With air quality worsening by the day, devotees in the holy city are helping gods avoid toxic air by covering the faces with anti-pollution masks.

At the famous Shiv-Parvati temple in downtown Sigra, the faces of Lord Shiva, Goddess Durga, Goddess Kali and Sai Baba have been covered with masks.

"Varanasi is a place of belief. We treat our idols as living deities and take pains to make them happy and comfortable. In summer, the idols are slathered with sandalwood paste to keep them cool and in winter, we cover them in woollens. Likewise, to save them from pollution, we have put masks on their faces," Harish Mishra, a priest at the temple told IANS.

But covering the face of Goddess Kali proved to be tedious. "She is an angry goddess and it is believed that her popped out tongue should not be covered. So we decided not to cover her face," said the priest.

"Looking at the covered faces of their deities, many devotees visiting the temple have also started wearing anti-pollution masks," Mishra added.

According to Mishra, every individual in the city is in his own way contributing to the increasing pollution. "Bad air did not deter the people from bursting crackers on Diwali. Now there is smog everywhere. But instead of doing something about it, municipal workers are only adding to the crisis by burning waste in the open. So despite the hue and cry, everyone is just contributing to the emergency. Until people come together to change their habits, the situation will never change," he said.