Global Tiger Day: When A Wild Tigress Jumped Into Odisha Zoo, Sacrificing Freedom For A Tiger

"A wild tigress of Chandaka forest lured by a captive male tiger jumped into his open air enclosure." 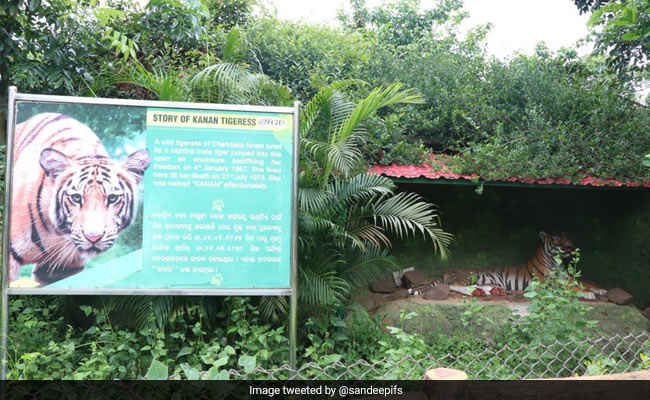 Kanan, a wild tigress, entered a zoo enclosure in 1967.

Global Tiger Day is observed every year on July 29 to raise awareness about tiger conservation. Also known as International Tiger Day, it was created in 2010 at the Saint Petersburg Tiger Summit. On the occasion of Global Tiger Day 2020, Environment Minister Prakash Javadekar shared a piece of good news, revealing that India "has 70 per cent of world's tiger population". The tiger population across the world dropped sharply since the beginning of the 20th century but now for the first time in conservation history, their numbers are on the rise.

International Tiger Day 2020 is being celebrated with hundreds of photos and videos of these magnificent animals on social media. Indian Forest Service officer Sandeep Tripathi was among those who celebrated Tiger Day, and he did it with a story that amazed many.

Mr Tripathi took to Twitter to share the story of Kanan, a wild tigress who jumped into a zoo enclosure in 1967, lured by a male tiger. Kanan, the tigress, sacrificed her freedom for captive tiger Pradeep and entered his open-air enclosure at the Nandankanan Zoo in Bhubaneswar, Odisha, more than five decades ago.

"On this day would recapitulate the unique love of wild tigress 'Kanan' jumping from freedom to the captivity of open-air enclosure of Zoo tiger 'Pradeep,'" wrote Mr Tripathi.

#GlobalTigerDay#Nandankanan
On this day would recapitulate the unique love of wild tigress “Kanan” jumping from freedom to the captivity of open-air enclosure of Zoo tiger “Pradeep” in the night of 4th January 1967 lured by love.Unique take in the Zoos of world????......1 pic.twitter.com/ppHkBYRylZ

Unfortunately, Pradeep would not accept Kanan as he already had a companion. According to the IFS officer, the tigress did not accept any other mate for as long as she lived. Now, the Kanan Square at Nandankanan Zoo "immortalizes this iconic love story".

Mr Tripathi also shared a photo of the Kanan Square, where a billboard informs visitors of this tale. "A wild tigress of Chandaka forest lured by a captive male tiger jumped into his open air enclosure, sacrificing her freedom on 4th January 1967," reads the board. "She lived here till her death on 21st July 1978."

#GlobalTigerDay#Nandankanan
However, Pradeep would not accept her, as he has his own female companion “Sikha”. “Kanan” would celibate till her death on 21st July, 1978 without accepting any other mate. The “Kanan square” in Nandankanan immortalizes this iconic love story....2 pic.twitter.com/sBwpMRS3GM

Incredibly enough, history repeated itself at the same zoo in 2013, when authorities captured a tiger that walked into Nandankanan Zoo on its own.