At World Cup, Russians And Foreigners Swipe Right On Love 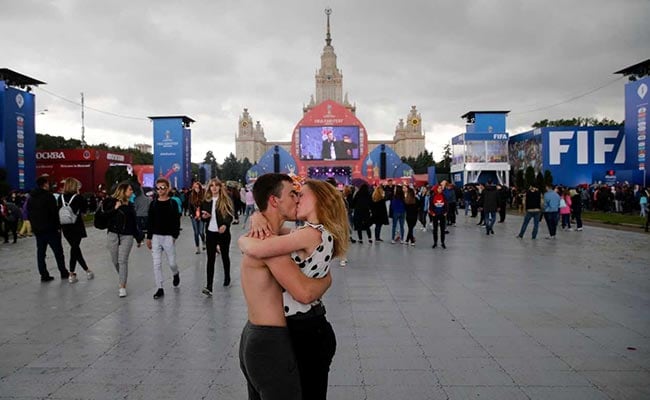 A couple kiss near Lomonosov Moscow State University (MSU), ahead of the start of FIFA World Cup (AFP)

Moscow: During an afternoon at a Moscow park, Argentina fan Augustin Otelo is counting not the number of goals his team has scored in the World Cup but the number of phone numbers he has collected from Russian girls.

"Four!" boasts the 26-year-old engineer dressed in his country's blue and white stripes as he competes with his friends to see who can get the most phone numbers.

Otelo said he hopes his "exotic factor" will help him "find love" in the Russian capital.

"We don't know what to do between matches, so we thought we could try to get to know the Russian people better," he said.

The Argentinians are flicking through selfies on their phones of Russian girls posing on the popular dating app Tinder.

"There's a lot of competition because of the number of men who have come to Russia for the World Cup," Otelo said.

But the language barrier has not stopped Russians and thousands of foreign football fans from mixing on the streets of Moscow, despite conflicting messages to Russia's female population from politicians.

On the eve of the World Cup, Communist lawmaker Tamara Pletneva warned Russian women that flings with visiting football fans could leave them raising children "of another race" alone.

"We should be giving birth to our own children," said Pletneva, who leads the lower house of parliament's family, women and children committee.

Another Russian MP, Mikhail Degtyaryov from the ultra-nationalist LDPR party, took the opposite view.

"The more love stories we have connected to the World Cup... the more children are born, the better," he said.

"Russian women can probably manage their own affairs. They are the best women in the world," Vladimir Putin's spokesman Dmitry Peskov said.

One 25-year-old woman, who gave her name as Maria S., said she had been "impatiently" waiting for the World Cup because it "multiplies opportunities to meet with foreigners."

"That is probably its main advantage," said the brunette, who took English classes ahead of the games.

Her friend, Lyubov, who speaks three languages aside from Russian fluently, called the World Cup an "asset".

"Usually I have two dates a week and now I have four. I have to say no to some," the young woman said, delighted.

Neither of the two friends has any illusions about the fact that their dates will return to their home countries when the World Cup ends.

"It's a bit like holiday romances, except that we will stay here," regrets Lyubov.

Aside from her romantic endeavours, Maria has tasked herself with another mission: to "change Russia's image."

"Tourists come here with cliches in their heads. I think they expect to see easy women dressed provocatively. I would like to change this cliche," the arts student said.

In May, the Argentinian Football Association published a manual offering tips on "how to get lucky with a Russian girl." It was widely condemned as sexist and the federation's head later apologised for it.

When a Brazil fan kissed the paper's young correspondent on the cheek, it said, his compatriot joked: "It's OK: he wants you in his bed like everyone else."

For older Russians, such romances are reminiscent of other major international events in Moscow, such as the 1980 Olympic Games hosted by the USSR during the Cold War.

Pletneva, the Communist lawmaker, said the Games were followed by an uptick of births of mixed race children which she called "a sad example."

Yelena, 51, remembers the 1985 International Youth Festival in Moscow, when she fell in love with Giorgos, a young Greek man.

"We were 19, we spent three days together and then he left. We wrote to each other for several months: I had to ask my friend to translate his letters from English. Then we stopped," she remembers.

"Today there are new technologies, it's not the USSR anymore and it is easy to travel," she said.

Promoted
Listen to the latest songs, only on JioSaavn.com
"The young people who meet each other at the World Cup can stay together."