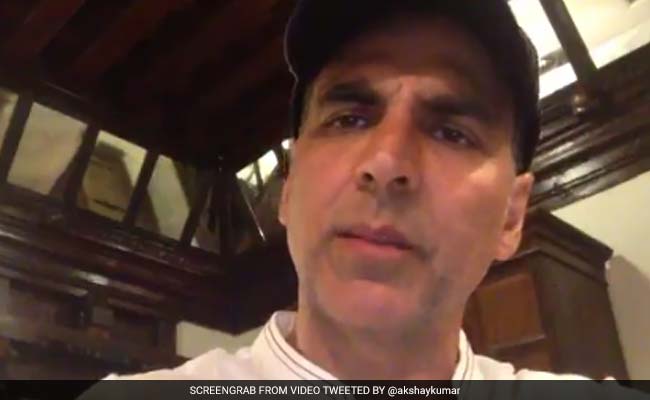 Akshay Kumar said his "blood boiled" when he learnt about the molestation.

In a video message posted on Twitter, Bollywood star Akshay Kumar has shared his outrage over the molestation of women in Bengaluru on New Year's Eve, comparing the attackers to "beasts".

"Truly shameful," tweeted the 49-year-old actor, a father of two including a daughter.

"The Bangalore incident makes me feel we are evolving backwards, from humans to animals, rather beasts because even animals are better!"

The actor said his "blood boiled" when he learnt about the molestation.

"I am ashamed to be a human being today. I was returning from my New Year's vacation with my four-year-old daughter in my arms when I learnt about the molestation incident in Bangalore. I don't know how did you all feel about it, but my blood started boiling. I am a daughter's father but even if I was not one, I feel if a society cannot respect its women, it doesn't deserve to be called a humane society," he said.

Most disgusting, he added, was that "people have the guts to justify such shameful acts by criticising women for their choice of clothes."  He advised that women should not consider themselves inferior to men, "just be fearless, be alert and learn self-defence."

The Bangalore incident makes me feel we r evolving backwards,from humans to animals,rather beasts coz even animals are better!Truly shameful pic.twitter.com/FJwJ80Mkby

Respect!
All girls MUST learn some form of self defence! Be strong, Be independent! https://t.co/JofQZII4L2

@akshaykumar your self defense academies for women shows how concerned you are about women's safety ..so proud of you

@akshaykumar salute you sir. Appeal the nation to stand against such acts strongly and punishment such animals which

@akshaykumar So so proud of you, In this wicked world still there are few ppl like you !!!Girls aren't just a " TOY " we also have feelings

@akshaykumar I love you for this, the humanity in you. The respect you've for women & they actually deserve it but sick people won't get it.

Akshay Kumar is among several Bollywood celebrities to outrage over the incident that has shocked the nation.

"It is sad. We all bear a responsibility and we all must do something about that. I feel very strongly, as a father, as a member of the society, that if something like this is happening in an environment so close to me, then I definitely must be impacted, must be affected and I must do something about it,"  actor Hrithik Roshan said at an event recently.

Women get molested irrespective of what they wear,where they are. Women in India are not safe,EVEN AT HOME. #Bengalurushame

We can't be a superpower if 50% of the population are treated like 2nd class citizens. DISGUSTING. Misogyny must end. #Bengalurushame

Argggh how this angers me.Sir punish the criminals not the victims. Women can wear what they want it's their choice. https://t.co/HSpRjlRq8A

This is what Dangal actor Aamir Khan said: