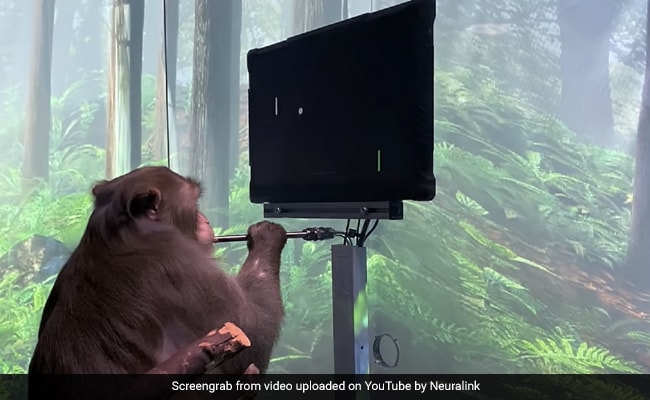 Neuralink, Elon Musk's start-up that is developing implantable brain-machine interfaces to connect the human brain to computers, has released a video which shows a monkey playing a video game using only its mind. Elon Musk shared the video of the monkey playing Pong on Twitter this morning.

Pager, a nine-year-old macaque monkey, had a Neuralink implanted about six weeks before the video was filmed. He was first taught to play an on-screen game with a joystick. The video shows Pager initially using the joystick to move a coloured square in the video game. Neuralink was able to use machine learning to anticipate where the monkey would move the square and predict its hand movements.

Eventually, the joystick was disconnected from the computer, but the monkey appears to continue playing Pong using only his mind. "We are pleased to reveal the Link's capability to enable a macaque monkey, named Pager, to move a cursor on a computer screen with neural activity using a 1,024 electrode fully-implanted neural recording and data transmission device," Neuralink said in a statement.

"Monkey plays Pong with his mind," wrote Elon Musk while sharing the link to the YouTube video on Twitter. "A monkey is literally playing a video game telepathically using a brain chip!!" he added. The tweet has racked up over 60,000 'likes' and hundreds of stunned reactions.

"This is insane," wrote one Twitter user, while another said, "We don't even know what we're going to achieve with technology in a few years, I'm so exited!!"

In a separate tweet, Elon Musk said that the first Neuralink product would allow "someone with paralysis to use a smartphone with their mind faster than someone using thumbs."

"Later versions will be able to shunt signals from Neuralinks in brain to Neuralinks in body motor/sensory neuron clusters, thus enabling, for example, paraplegics to walk again," the billionaire entrepreneur added.

Later versions will be able to shunt signals from Neuralinks in brain to Neuralinks in body motor/sensory neuron clusters, thus enabling, for example, paraplegics to walk again

According to Neuralink, by modeling the relationship between different patterns of neural activity and intended movement directions, they were able to predict an intended movement. "We can go further than simply predicting the most likely intended movement given the current pattern of brain activity: we can use these predictions to control, in real time, the movements of a computer cursor, or in the video, a MindPong paddle," they said.