"Aloha, welcome back from space," Elon Musk captioned the video. 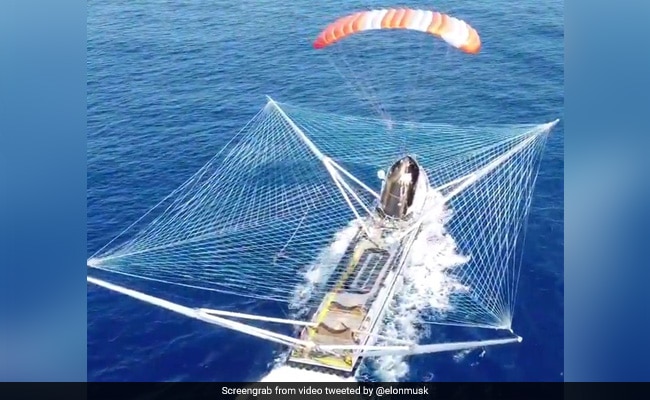 Falcon 9's fairing returns to Earth and is caught by a ship.

SpaceX CEO Elon Musk has shared an incredible video of a ship recovering a rocket fairing at sea in a first for the company. When a rocket launches with some payload, it needs a fairing, which is essentially the rocket's nose cone, explains Wired. However, once the rocket gets past Earth's atmosphere, the fairing becomes extra weight and is dropped to fall back to Earth.

Usually, these fairings are not recovered. They are, however, expensive components. For the Falcon Heavy rocket, it appears they can cost about $6 million, according to Wired.

Now, in a jaw-dropping feat, SpaceX has managed to recover one of its fairings by using a large parachute to slow it down. According to Teslarati, the Falcon 9 rocket fairing was recovered hours after the successful Starlink-10 launch on Tuesday.

A video shared by Mr Musk, 49, on Twitter shows the successful catch. The video, set to soothing elevator music, shows the rocket fairing landing on the gigantic net of a moving ship dubbed Ms Tree.

"Aloha, welcome back from space," Elon Musk captioned the video.

Aloha, welcome back from space ???? pic.twitter.com/xWPN09Wtaw

The crystal clear video of the successful catch has collected a whopping 4 million views on the microblogging platform. In fact, its clarity prompted some to question its authenticity - asking if the clip is real or computer-generated.

When asked in the comments section if the video is real, Elon Musk replied "yes".

He also addressed comments on the choice of background music, writing: "Elevator music is underrated."

Many applauded the successful catch. Paytm CEO Vijay Shekhar Sharma hailed SpaceX as the company that has "changed space industry forever" while sharing the clip.

This is Falcon 9 rocket's fairing as it returned to earth ???? pic.twitter.com/LGMGLVnsE5

"Come for the cool video of yet another expensive space component being recovered for reuse. Stay for the smooth elevator music," wrote one Twitter user.

"Fantastic. Every time SpaceX recovers a rocket component like this, the cost of future space travel goes down," another wrote.

Pradhyuman From Netflix's 'Indian Matchmaking' Addresses Questions On His Sexuality