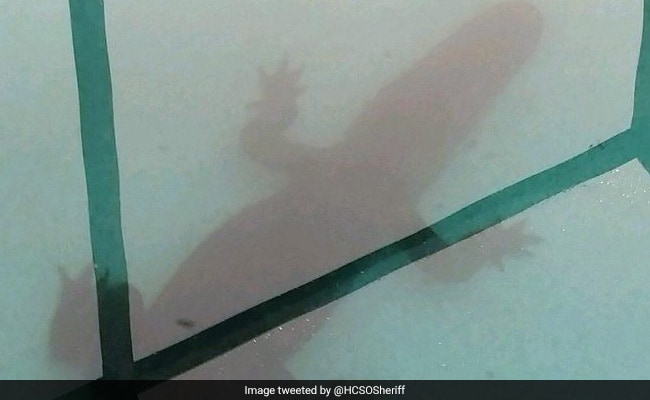 Hillsborough County Sheriff's Office posted pictures and updates from the scene on Twitter.

No one likes intruders, least of all huge scary reptiles. A family in Florida was in for a shock when they found a giant, approximately eight foot large alligator casually taking a swim in their pool. Pictures of the alligator have been posted on Twitter and the one reaction they'll bring about is 'nope!'

The official Twitter account of the Hillsborough County Sheriff's Office posted pictures and updates from the scene. "Deputies on scene now, apprehension of this trespassing suspect should be interesting. - Alligator in residential pool," they tweeted along with a picture of the gator.

Deputies on scene now, apprehension of this trespassing suspect should be interesting. - Alligator in residential pool. pic.twitter.com/L80jFnqSsx

In another tweet, they confirmed that the reptile was approximately seven to eight feet long. They also confirmed that a team from the Florida Fish and Wildlife Conservation Commission was on their way to rescue the alligator.

Deputies confirming the alligator is approx 7 to 8ft, a licensed @MyFWC trapper is enroute to the scene. pic.twitter.com/IcZdo0AY7h

Several people have posted their reaction to the alligator in the swimming the residential pool on Twitter.

I would possibly drop dead of a heart attack