Dog walkers' notes are often more exhaustive than those parents get from the caregivers of their human children. 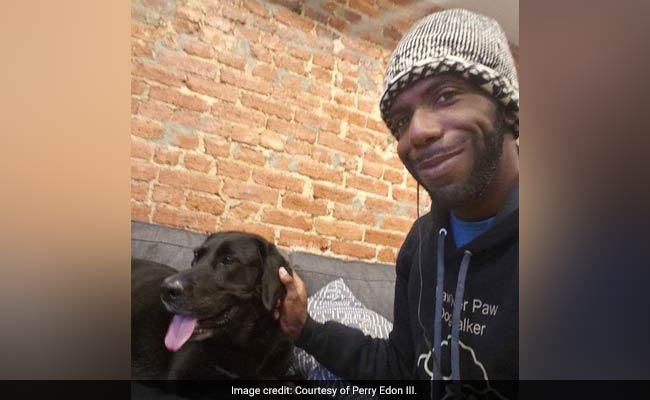 Perry Edon III with one of his charges, Tux, in Washington.

There is a spot on 14th Street NW in Washington that is often littered with the remains of takeout chicken. In the text vernacular of dog walker Perry Edon III, it is a "bone zone." A pooch sniffing fire hydrants in San Francisco may appear to be dillydallying. But in the prose of walker Christy Griffin, the dog is "checking her peemail."

And to both of them, a dog's poop is not just a poop. For clients who want to know about it - and most of them do - it is a very notable action, and sometimes a product to be described in great detail.

In a nation where people lead ever more busy lives and increasingly view their dogs as family members, professional dog walking is flourishing. And along with it is what might be viewed as the unusual art of dog walker communication. Many of today's walkers do not simply stroll - not if they want to be rehired, anyway. Over text and email, they craft fine-grained, delightful narratives tracing the journey from arrival at the residence to drop-off. They report the number of bathroom stops. They take artistic photos, and lots of them.

"For an hour-long walk, I send six or eight, depending," said Griffin, 44, who holds a treat in her hand when shooting to ensure her charge is looking at the camera. "Then I give a full report that includes not only peeing and pooping but also kind of general well-being, and if the dog socialized with other dogs."

After walking a dog named Stevie Nicks earlier this year, Griffin's blow-by-blow mentioned that the dog had collected a chicken bone from under a bush, then "crunched down on it and broke into 3 pieces." At the end of another walk, Griffin related that she "picked the foxtails out of her little beard and mustache," and explained precisely where the foxtails had come from - "the fence around the yard at the corner."

Dog walkers' notes are often more exhaustive than those parents get from the caregivers of their human children. That is partly because whether a dog relieved itself can be the difference between an unsullied carpet and a steam cleaner rental, but also because many owners consider their pooches children, only the kind who cannot report on their own days.

"I have a three-year-old daughter, and I've come to the conclusion that some people treat their dogs like kids completely," said Henry Moraga, 37, who spends every weekday, from morning to evening, pounding the streets of Oxnard, Calif., with groups of dogs that vary in number from three to 12.

Natalie Lockwood, a former preschool teacher who walks dogs in Seattle, hesitated for a moment when asked to compare dog owners' desire for detail to that of small children's parents. "I would say it's almost even," she concluded, adding of dog owners: "Some will want to talk ad nauseam, and I don't mean that in a bad way."

For those who do want to know everything, Lockwood said she is happy to oblige. She recalled a time she took a dog named Avery not just walking, but swimming, and then recounted the experience to his family.

"He was going around swimming, toddling, then he came at me, and he wanted me to hold him under his belly while he floated like a baby," said Lockwood, 41, who arranges walks through Rover, a nationwide service. "Tell me you're not going to die when you hear a story like that! I mean, you melt."

When sending his monthly bill, Moraga said he always includes a handwritten note on custom stationery, telling a dog's owner "what they've done through the month, what they've learned, what we're planning on doing next month."

Rover requires its walkers to complete a standardized "report card" that includes arrival and drop-off times, route and pit stops. But sections for adding photos and a written account are where "walkers can really shine," said Jenna White, the company's director of dog-walking operations. New walkers are shown examples of particularly strong narratives during training, as well as advice on photos, the best of which White said have good lighting and not too much motion. Shots taken at iconic local spots, like doggy senior portraits, are even better, she said.

"Ongoing, two-way communication is actually one of the most important components to a successful walk," White said. "What we've heard from owners is the more details, the better. You can't have too many details."

But most dog walkers interviewed for this article said their documentation skills were self-taught, honed when they realized clients demanded them. Edon, 28, who started walking dogs in 2014, said he worked for one company that wanted pooch photos taken only in front of uncluttered backdrops - no outlets or cords, please. Now a free agent, Edon said he just tries to "make them stand like a good boy or good girl."

He said his humorous text missives - and they are nearly all text - are an extension of his "quirky" personality. In them, he both channels dogs and mocks them when he believes an owner can take it; once, he texted a pug parent that the dog's breed name stands for "pretty ugly" dog.

"It's never a generic copy-and-paste type of thing," Edon said. Dogs "get grumpy. They have attitudes. They get sick. They feel bad. They go through emotions, and I, as their walker, love to reiterate that to their owner."

The first video Edon ever sent to Amy Tucci showed her great Pyrenees, Eddie, turning tail and running up the stairs at the sight of his new dog walker, Tucci recounted with a laugh. Now, she said, Eddie adores Edon, who even provides updates on her elderly cat, though it is not his job.

"All of our dog walkers have been really good communicators, but Perry wins the prize," said Tucci, a nonprofit executive. His texts "are really are more logistical and poop-oriented than anything else. But they're always so enthusiastic."

The intimacy such communications foster mean walkers sometimes start to be treated like family members, too. Edon said one client peppers him with so many questions about how to handle various dog issues that he feels like he is "co-parenting."

This year, one of Moraga's regulars, a border collie mix named Sadie, died following a bout with cancer. Her owner held a wake, and Moraga was invited. "It was just a bunch of people, beers and a toast," he said.

To help the owner cope, Moraga sent the videos and photos he had captured of Sadie during all their walks together.