Watch how this duck outsmarted a tiger. 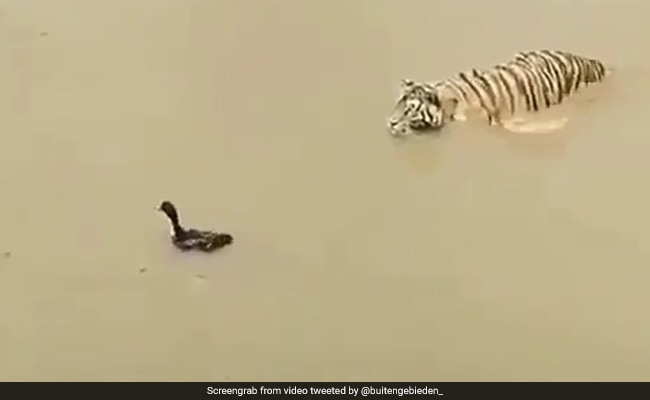 A duck makes a great escape from right under a tiger's nose.

This duck narrowly avoided being turned into a tiger's meal with sheer craftiness and some good luck. A hilarious video that has resurfaced on Twitter and is going viral again shows the moment a duck managed to outsmart a tiger, leaving the big cat bewildered. Though it is at least two years old - it had gone viral in 2018, according to the Daily Mail - the short clip has captured the Internet's attention again after being posted by popular Twitter account Buitengebieden.

The video shows the tiger swimming towards a duck. Though these big cats are known for their amazing stealth and hunting skills, this one was no match for its possible prey - the duck that quickly ducked underwater and emerged a few feet away, successfully trolling the tiger. The video shows the tiger looking around in confusion as the bird swims away calmly behind its back.

On the occasion of Global Tiger Day 2020, watch this tiger getting trolled by a clever duck in the video below:

Since being posted a few hours ago, the video has collected over 26,000 views and hundreds of amused comments.

"No matter how big they get, cats are essentially the same," quipped one Twitter user.

"This is so beautifully elegant!" another remarked.

The tiger is the largest extant cat species and an apex predator known for its dark stripes. Global Tiger Day, also known as International Tiger Day, is celebrated every year on July 29 to raise awareness about tiger conservation.