Caught On Camera: Woman's Close Shave With Car That Ploughed Into Bus Stop

"This is one lucky lady." 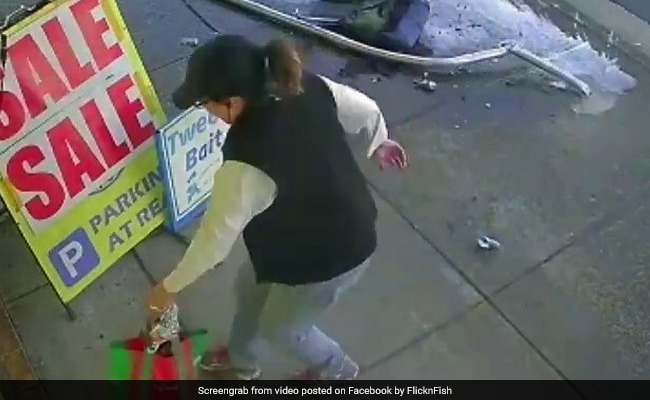 CCTV footage shows a car crashing into a bus stop near Sydney.

A woman avoided a collision with a car by mere seconds, shocking footage shared online shows . Chilling footage that was captured on surveillance cameras in Sydney, Australia, shows the moment a car ploughed into a bus stop where the woman had been standing. Luckily, she had moved away from the spot just seconds before the car crashed there.

According to The Mirror, the woman was identified as Karyn Johnson. Ms Johnson was standing at a bus stop in the northern suburbs of Sydney, on Sunday, August 16, when the accident occurred.

Footage of the accident was captured by a CCTV camera installed outside Flick n Fish - a bait and tackle shop in the area. It shows Ms Johnson putting her bag down at the bus stop and moving away - a decision that probably saved her life. The car hit a sign and her shopping bag, spilling a bottle of sparkling wine on the ground.

"What I witnessed today is something that I won't forget for a long time. This is one lucky lady," the owner of Flick n Fish wrote on Facebook while sharing the video. "Our neighbors shop was seriously damaged from the impact of the car but thank GOD no one was seriously injured."

"I can't explain why I moved away so I think somebody was looking out for me..." said Ms Johnson to Nine News while speaking about the incident. "I'll be forever grateful. I now have to find my purpose in life if I am still here."

Recently, a man in Kerala narrowly avoided a speeding vehicle by mere inches.