Kerala viral video: A man's narrow escape from a speeding vehicle was caught on camera. 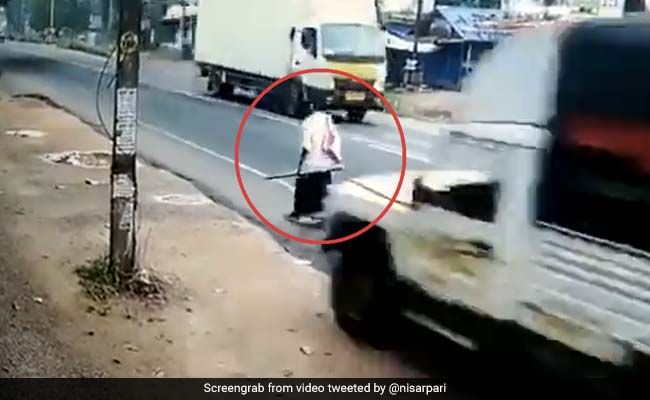 A chilling clip shows a man's close encounter with a speeding vehicle in Kerala. The clip, which has left many on social media stunned, shows the vehicle zooming past the man, avoiding him by mere inches. It is being widely circulated on social media since it surfaced online a few days ago.

According to Twitter user @nisarpari, who shared the clip on Twitter two days ago, the incident took place in Kerala's Kollam district and was recorded on CCTV cameras. In the 22-second clip, a man can be seen walking on the side of a road when a speeding vehicle comes up behind him. The vehicle lurches to avoid hitting the man, who was seen looking confused for a few seconds before turning back and walking in the opposite direction, probably realising that he had just had a narrow escape.

"Luckiest man of the month award goes to this man," Twitter user Nisar wrote while sharing the video of the narrow escape. Watch it below:

Luckiest man of the month award goes to this man.

The video has garnered thousands of views on the microblogging platform, along with several comments. While some said the pedestrian was at fault, others blamed the speeding truck driver, leading to a heated debate in the comments section.

He was walking on the motorcycle way not where 4 wheelers are supposed to operate. The driver was definitely way over any speed limit. People like you defending road rage culprits is the reason more people die in road accidents in India

people walking on roads is common but overspeeding truck going on the sidewalk isn't. https://t.co/tTcUs8fXr2

So close, oh my! He wasn't aware and escaped being hit by a whisker...epic

Last month, a video of another narrow escape had captured social media's attention. In the jaw-dropping video, a Mahindra Bolero SUV crashed into an out-of-control JCB machine, saving the life of a biker.

Caught On Camera: Two Women Thrash Each Other During Fight At Nashik Toll Plaza