Viral: A Car Crash That Saved A Biker's Life - Summed Up In Anand Mahindra's Tweet

Watch this man's narrow - and incredibly lucky - escape from a JCB machine and a Bolero SUV. 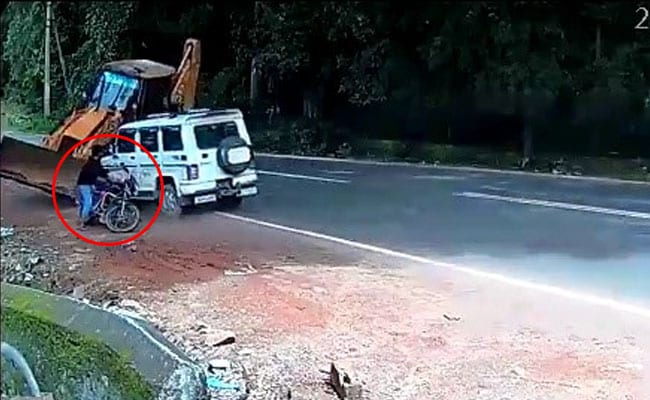 On camera, a motorcyclist's narrow escape from a JCB excavator.

A jaw-dropping video shows the moment a Mahindra Bolero SUV crashed into an out-of-control JCB machine, saving the life of a biker. The biker's narrow escape was captured on camera in dramatic footage that has gone massively viral on social media and set "Bolero" trending on Twitter.

The Bolero SUV, known for its sturdy built, found a number of new fans this weekend as the video surfaced on social media. The short clip shows a JCB excavator careening wildly on a road - just about to hit a man standing on the roadside with his bike. However, before the man could run from the spot, a speeding Mahindra Bolero SUV appeared from the opposite direction and crashed into the JCB, turning it away from the biker and possibly saving his life.

Though his bike suffered from the impact, the man himself escaped without any serious injuries and somehow avoided getting crushed by both the Bolero and the JCB. Miraculously, the driver of the SUV, too, appeared to be unhurt in the accident. Watch the incredible escape below:

#NDTVBeeps | A biker narrowly avoided being crushed between a JCB and SUV as they collided. His incredible escape was caught on CCTV pic.twitter.com/3527JNRPn8

The footage of the accident has gone massively viral on the microblogging platform and collected hundreds of responses from stunned viewers. As praised poured in for the Mahindra Bolero SUV, Anand Mahindra, Chairman of Mahindra Group, also joined the conversation.

"It appears as if the Bolero came to life and its only mission was to save the motocyclist's life," wrote Mr Mahindra in Hindi while sharing the video on Twitter this morning.

Others on the microblogging platform also hailed the SUV's role in possibly saving not just the biker, but also the driver of the car itself.

"Bolero saved the guy! Indeed Mahindra makes one of the safest cars in India!" wrote one person.

"There can't be better crash test of a vehicle than this! And we can see Bolero passed with flying colors!" another remarked.