It truly was a 'Three Amigos', moment in Ottawa, Canada when US President Barack Obama and Mexican President Enrique Pena Nieto met Canadian Prime Minister Justin Trudeau at the North American Leaders Summit on June 29. And if we go by the pictures from the event, it wasn't all work at the conference.

While the topics for discussion ranged from Brexit and Donald Trump to climate change, immigration and trade, there was a full-blown 'bromance' on the sidelines. Sorry, "'dudeplomacy' is more accurate," as PM Trudeau said.

Some exceptionally awesome photo ops were seen, like this one... 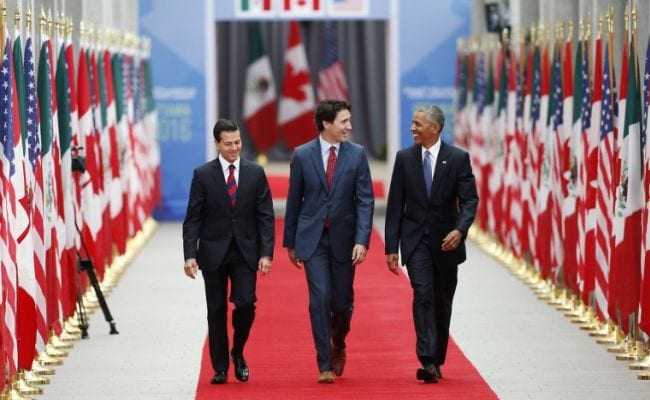 And even awkward three-way handshakes were tried

However, it's this selfie shared by the Canadian Prime Minister of himself and POTUS that really impressed Twitter:

One more for the road! la prochaine. #NALS2016pic.twitter.com/8Q5zCSU3CK

Tweeted earlier this morning, the photo has found a lot of love with over 3,000 retweets and 8,000 'likes'.

@JustinTrudeau the bromance lives on, I don't want it to end

What do you think of this brilliant selfie? How would you caption it? Share your ideas in the comments section below.