Read inOther Languages
This Article is From Nov 20, 2020

The elephant was feasting on sugarcane at a farmer's field when it saw humans approaching and apparently decided that the best course of action would be to hide behind a pole much smaller than itself. 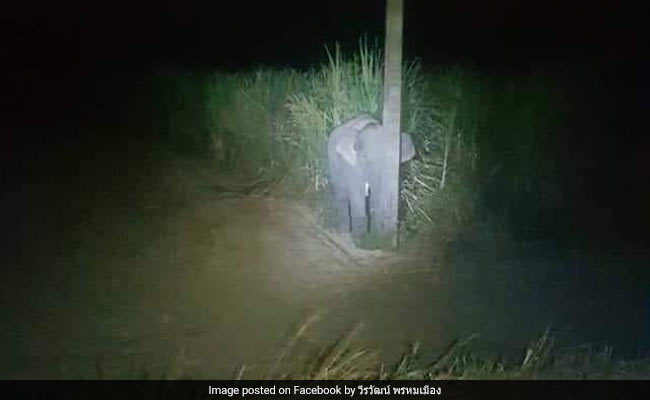 A baby elephant unsuccessfully hiding behind a pole.

For your daily dose of adorable animal posts, look no further than this picture of a baby elephant that tried to hide behind a pole after being caught eating sugarcane in a field. The adorable sugarcane thief was photographed after being caught red-handed in the middle of its heist in Chiang Mai, Thailand, according to the Bored Panda.

The playful elephant was feasting on sugarcane at a farmer's field when it saw humans approaching and apparently decided that the best course of action would be to hide behind a pole much smaller than itself.

As per a Daily Mail report, the elephant even stood still as locals shone a spotlight at it, hoping to not get spotted. Needless to say that things did not work out quite as it had hoped, but the jumbo's unsuccessful attempt at hiding did give the Internet an adorable picture.

The hilarious photograph was posted on Facebook with a caption (translated from Thai) that reads: "Keep calm. Officers will see. Let's continue eating sugarcane."

Elephants are known to love bananas and sugarcanes. Earlier this year, Indian Forest Service officer Susanta Nanda had shared a video of another sugarcane thief - this one more brazen than our bashful little baby elephant.

Delicious lunch break ????
Sugarcane is one of favourite food of elephants. In captivity sugarcane is an integral part of the diet plan. To provide energy. pic.twitter.com/IsjJDQCx2k