"Nobody will wear this in my house," Ashneer Grover told the fashion designer 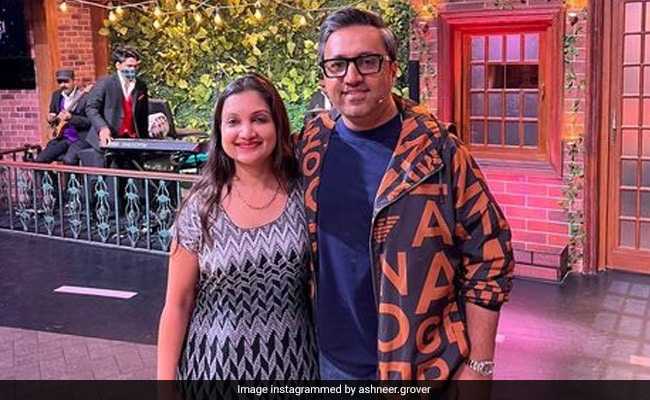 When Shark Tank India contestant Niti Singhal pitched her clothing brand on the show, she faced some harsh criticism from Ashneer Grover. Mincing no words, the BharatPe co-founder told her that she should stop wasting her time on her brand, Twee In One, and instead sell lehengas with her mother. For Ms Singhal, comeuppance came when Ashneer Grover's wife was later spotted wearing one of her designs on The Kapil Sharma Show.

Twee In One is a brand that makes reversible and convertible clothing. The brand's founder, Niti Singhal, was one of the 198 entrepreneurs who got the chance to present their ideas on Shark Tank India - a show where entrepreneurs pitch their business ideas in front of investors in order to persuade them to invest in their companies.

As it turned out, somebody in Mr Grover's house did end up wearing a Twee In One design. His wife Madhuri Jain Grover was recently spotted wearing a dress from Ms Singhal's brand on The Kapil Sharma Show.

The whole incident was condensed into a short video which Twee In One shared on their Instagram this Monday while thanking Madhuri Grover for believing in their work.

You can watch the video here.

The video has racked up hundreds of amused comments. "This is the heights of doglapan," wrote one Instagram user, referring to a phrase used by the BharatPe co-founder on the show. "This is epic," said another, adding laughing-face emojis.

Madhuri Jain Grover also responded to the video, thanking the brand for the dress. According to a Times of India report, the dress was gifted to her by Ms Singhal when they came to pitch their idea on Shark Tank.

"Thank you for the dress. I think the sharks didn't like the dresses presented on the side board, the dresses worn by you and the models were good. Keep up the good work and wish you all the best for your venture!" Ms Grover wrote in the comments section.

On Shark Tank India, Ashneer Grover told Niti Singhal that she should sell lehengas with her mother as that might be more profitable. The fashion designer says she wasn't rattled by the criticism. "With the kind of product I have, there has been critical feedback for a long time," she was quoted as saying by Hindustan Times. "I am used to it. Even mentors in the fashion industry said a few harsh things over the years. So I have received criticism, of course not as harsh as Ashneer's.

"But since I have, it has made me thick-skinned. I believe in my product so I have the confidence to face all criticism," she added.