In 2010, coach Lucas Saucedo tried a similar stunt at the world championships in Paris 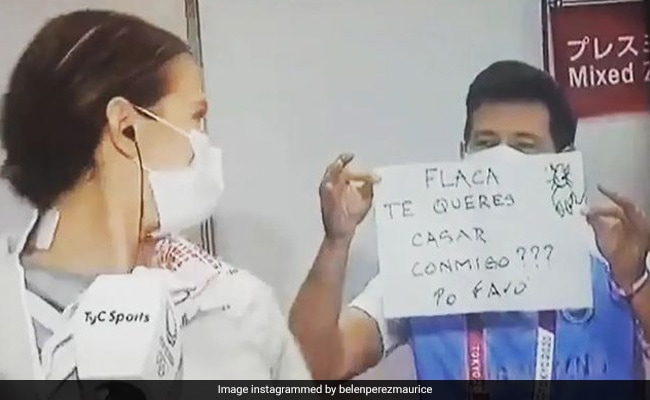 Argentine fencer Maria Belen Perez Maurice accepted a marriage proposal from her long-term partner and coach in front of television cameras at the Olympics on Monday, the second time he had posed the question in similar fashion.

The athlete, after a first-round exit in her third Olympics, was disappointedly answering questions from reporters when her coach, Lucas Saucedo, appeared behind her with a piece of paper in his hand reading "Do you want to marry me?". He put one knee to the ground.

"Tell me yes, a lot of people are looking at us," he said.

In 2010, Saucedo tried a similar stunt at the world championships in Paris, but with far less luck. Back then, she replied: "Is this a joke or what?"

Eleven years on, though, she said yes.

"I was speechless. I said to myself 'Oh my God'," said Perez Maurice, who has been in a relationship with Saucedo for 17 years. "We're going to celebrate it in Argentina around a big asado (a traditional barbecue)."

It was a great end to a day which started with a 15-12 loss to Hungarian Anna Marton in the women's sabre event.

On Sunday, Germany football forward Max Kruse successfully asked his girlfriend to marry him on live TV after his team's 3-2 win over Saudi Arabia.