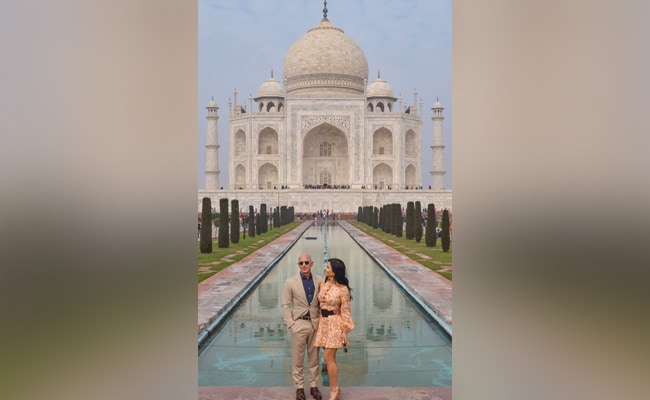 Jeff Bezos and Lauren Sanchez posed in front of the Taj Mahal.

Amazon founder and CEO Jeff Bezos visited the Taj Mahal in Agra, Uttar Pradesh, during his trip to India. Mr Bezos, 56, was accompanied by his girlfriend, Lauren Sanchez, during his tour of the iconic Mughal-era monument.

The two were seen posing in front of the reflective pool that leads to the Taj Mahal. Many celebrities and world leaders have posed at the same spot, including Prince William and Kate.

While Mr Bezos chose a simple suit for the visit, Lauren Sanchez wore an orange and white dress. Photographs that are being widely shared online show Mr Bezos and Ms Sanchez smiling for the cameras with the 338-year-old white marble monument in the background.

Jeff Bezos and his girlfriend pose in front of the Taj Mahal, then he bought it. pic.twitter.com/96s3z5Ybd5

Jeff Bezos and his girlfriend Lauren Sanchez in front of the reflecting pool which leads to the 338-year-old mausoleum, the Taj Mahal in Agra, India on Tuesday pic.twitter.com/smpkGXL0TE

In posts shared on Instagram and Twitter early on Monday morning, Mr Bezos announced that the company had started to roll out its fleet of electric delivery rickshaws. "Fully electric. Zero carbon," he wrote, sharing a video that shows him driving one such electric rickshaw.

Mr Bezos began his trip to India last Tuesday by visiting the memorial to Mahatma Gandhi in Delhi. During his three-day trip, he also flew kites with a group of children, visited an Amazon 'Silent Delivery Station' in Mumbai and sat down with Shah Rukh Khan and Zoya Akhtar for a forty-minute chat.