Jeff Bezos, In India, Pays Respects To "Someone Who Truly Changed World"

"Just landed in India and spent a beautiful afternoon paying my respects to someone who truly changed the world..." Amazon CEO Jeff Bezos tweeted 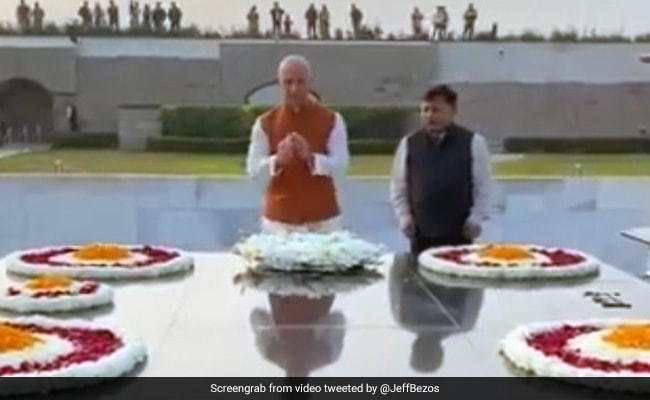 Amazon CEO Jeff Bezos visited the memorial to Mahatma Gandhi in Delhi after he landed in India on Tuesday. He posted a video where he is seen in a white kurta and an orange half-jacket, carrying a colourful wreath of flowers on the lawns of the memorial at Raj Ghat near central Delhi.

After placing the flowers, he folds his hands to pray before walking away.

"Just landed in India and spent a beautiful afternoon paying my respects to someone who truly changed the world. "Live as if you were to die tomorrow. Learn as if you were to live forever." - Mahatma Gandhi," Mr Bezos tweeted. He also posted the video along with the same message on Instagram.

The e-tailer giant's chief executive's visit to India comes at a time when the country's anti-trust body Competition Commission of India said it is looking into alleged unfair practices by Amazon and Walmart's Flipkart.

Just landed in India and spent a beautiful afternoon paying my respects to someone who truly changed the world. "Live as if you were to die tomorrow. Learn as if you were to live forever." - Mahatma Gandhi. pic.twitter.com/xDXAT9cBgf

Big e-commerce firms should not offer steep discounts, must disclose discounting policies and ensure they do not drive brick-and-mortar rivals out of business, the CCI chairman Ashok Kumar Gupta has said.

"If you are absolutely clean, come out, put it (details) on your website, so that everybody knows and there is nothing opaque," Mr Gupta told news agency Reuters. "Otherwise there will be complaints, we will inquire. Why do you want to subject yourself to this type of investigation if you are open about it?"

Mr Bezos is likely to participate at an Amazon event in Delhi, Reuters reported. He has also sought meetings with Prime Minister Narendra Modi and other government officials, it said.

Amazon has committed $5.5 billion in India investments, while Walmart in 2018 pumped in $16 billion to buy a majority stake in Flipkart, its biggest deal.

A complaint by the Delhi Vyapar Mahasangh, whose members include thousands of traders dealing in smartphones and related accessories, have accused the e-tailers of anti-competitive practices like preferential listing, exclusive tie-ups and private labels.

The traders have said they will hold a massive protest during Mr Bezos' visit to India.