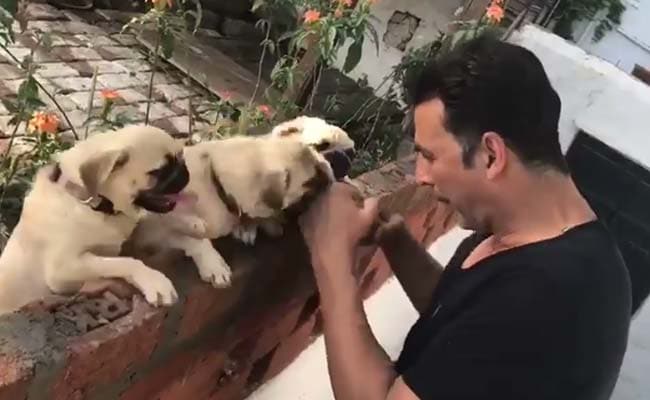 NEW DELHI: Several celebrities share their workout videos on social media but none compare with this one posted by actor Akshay Kumar. Bollywood's resident Khiladi's workout in this video doesn't involve sweating it out at a gym or lifting heavy weights - this one's zara hat-ke. The video shows Akshay "boxing" with four adorable pugs. And mind you, they seem to be giving the Rustom actor quite a tough fight.

Less than 30 seconds long, the video shows the actor playfully fighting the little pooches. "Today's workout:  boxing with these cute little goons," says Akshay on Facebook, Twitter and Instagram.  He even hashtagged the video #PugLifeThugLife.

While Akshay uses his closed fists to "box" his furry opponents, the dogs use their paws and snouts to return the blows. The end result is the cutest fight ever.


Who knew workouts could be this awesome?

Promoted
Listen to the latest songs, only on JioSaavn.com
Within two hours of being shared, the video has collected over 6.6 lakh views on Facebook and another 3.9 lakh views on Instagram. Not that it's any surprise but many of the comments on the video, across all social media platforms, involve the word "cute".

The video definitely makes us smile. What about you?