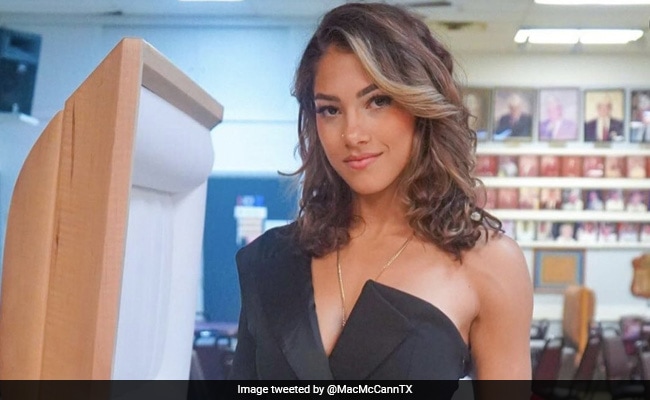 An Instagram influencer has been slammed on social media for sharing a photo of herself posing next to her father's open coffin at his funeral. Florida-based Jayne Rivera, 20, has deleted her Instagram account after the backlash. But screenshots of her images have been doing the rounds on social media platforms. In the images, she wore a fitted, black blazer dress as she stood by the coffin, which was adorned with an American flag. In one of the frames, she posed with her hands folded.

“This Instagram model's father passed away, and she did a photoshoot with the open casket,” said a social media expert on Twitter, sharing the images.

this Instagram model's father passed away,,,, and she did a photo shoot with the open casket…. pic.twitter.com/u1EVNxaajz

The photos generated immediate backlash on the platform. "Have I mentioned the problem of a narcissistic and performative culture," wrote a Twitter user.

Have I mentioned the problem of a narcissistic and performative culture https://t.co/l7U7ZqdQKO

“People seem to have lost all decency,” read another comment.

Many criticised her for smiling and posing

AND SHE IS SMILING AND POSING https://t.co/EpPhloHSlM

This person questioned her choice of outfit. “Why would you wear this to a funeral?" the post read.

why would you wear this to a funeral

Ms Rivera, however, defended herself while talking to NBC News, saying she “understood the negative reception” but the photos were taken “with the best intentions in a manner my father would have approved with had he still been alive.” The content creator said everyone handles the loss of their loved ones in their own way – “some are more traditional while others might come across as taboo." "For me, I treated the celebration as if my father was right next to me, posing for the camera as he had done on many occasions prior."

As the criticism grew, some said while they agreed with what she did was wrong, the outcry over it was as insensitive as the post itself.

“Not what I'd have done, though grief is a weird thing and maybe putting this girl on blast on the day of her dad's funeral is a thing you could have chosen not to do,” said one user.