'This is reminding me of a literature version of Pokemon Go, except instead of catching Pikachu, it's an empowering novel,' tweeted a fan. 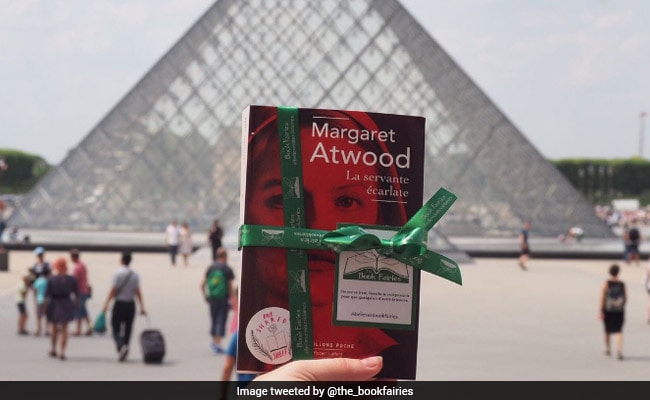 Actor Emma Watson made at least 100 book-lovers in Paris very happy on Wednesday as she wandered around the French capital hiding copies of Margaret Atwood's The Handmaid's Tale. Working with a group called The Book Fairies, the actor tweeted to announce she would be hiding books around the city. Members of The Book Fairies routinely hide books around the world for people to find, read, and, ideally, leave for someone else. The group tweeted clues about where the books were being hidden in Paris and many of them were discovered by lucky fans.

Everyone in Paris right now: pic.twitter.com/DGC8ErG2Q2

You guys are awesome,this is reminding me of a literature version of Pokemon go,except instead of catching pikachu it's an empowering novel https://t.co/FqtwUahe3r

@EmmaWatson hiding books in Paris is like Willy Wonka's golden tix except u get enlightenment  empowerment instead of chocolate. #OSSParispic.twitter.com/0Ni20U0pWn

Many people who found the books posted pictures to the micro-blogging site tagging the actor:

I'm literally dying! I just found one of the books @EmmaWatson hid in Paris for @the_bookfairies.
I can't breathe!!!
I'm reading it now!!! pic.twitter.com/VcrBjfjs05

And if that wasn't magical enough, two of them were lucky enough to meet the actor on the red carpet of the premiere of her latest film The Circle:

Two lucky finders of The Handmaid's Tale in Paris were also lucky enough to meet Emma on the red carpet for #TheCircle! #OSSParis  pic.twitter.com/jmCS3nFL9D

Promoted
Listen to the latest songs, only on JioSaavn.com
The dystopian novel is this month's pick for Ms Watson's online book club, Our Shared Shelf. The Handmaid's Tale was recently turned into a popular television series. Set in the near future, the book describes life in what was once the United States and is now called the Republic of Gilead.

Puppy Born With 6 Legs, 2 Tails Has Survived Against All Odds