Pythons are known to swallow their prey whole 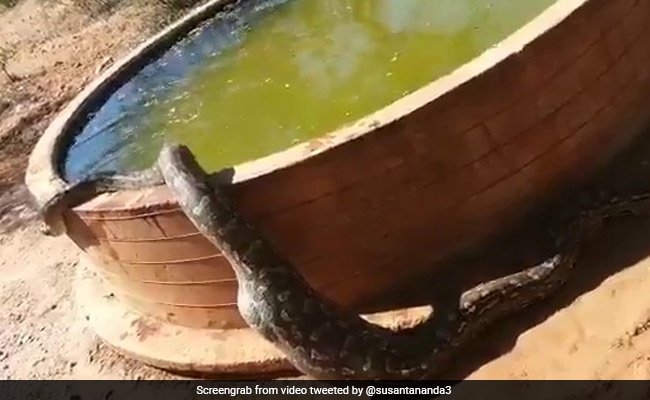 A python cools down after a big meal in this viral video.

A video of a huge python has left social media users amazed - but if you dislike creepy crawlies, you may want to skip watching it. The video shows the snake of gigantic proportions cooling in a tub of water after a heavy meal. It was shared on Twitter this Tuesday by Indian Forest Service officer Susanta Nanda, who explained that the python had probably just eaten food.

Pythons are known to swallow their prey whole. These snakes use their teeth to seize prey and kill it by strangulation. After eating a large prey, a python can go for weeks without needing to feed again.

In this video, the python's swollen body seems to suggest that it had just devoured a prey. The video shows the snake slithering laboriously into a tub of water to cool down.

"A huge python after a meal to cool itself..." wrote Mr Nanda while sharing the short clip. Take a look:

A huge python after a meal to cool itself... pic.twitter.com/OwvmAmEyjk

The video has collected over 10,000 views and a number of stunned comments since being posted.

"This is scary," wrote one person, while another said: "I wonder what's in its stomach".

Mr Nanda had shared the same video in April this year, crediting it to South African National Parks. Meanwhile, it is not the only serpent-centred post that the IFS officer has shared on Twitter. On the occasion of World Snake Day on Thursday, he also shared a picture of a rare albino king cobra.

Albino Cobra due to non production of pigments.On world snakes day just posting it in case you have not seen this.

See the pink eyes that are common in albinos. pic.twitter.com/nB8AB3UV5U

If you would like to know more about snakes, read this to find out about some of the strangest snakes in the world.