From leaf-nosed snakes to rainbow coloured ones, take a look at some of the weirdest snakes that exist on Earth... 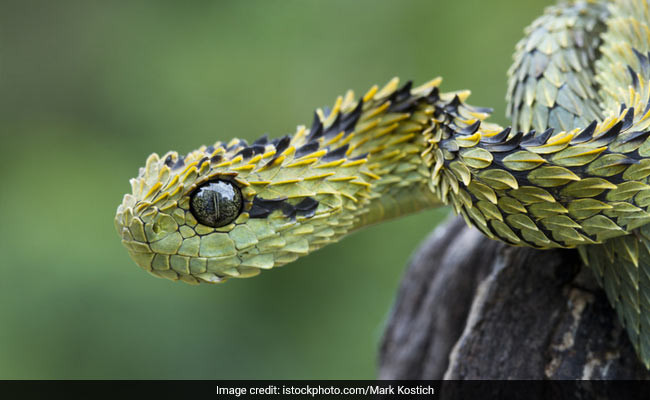 The hairy bush viper is a venomous viper famous for its bristly appearance.

Snakes have inspired fear and fascination in the minds of people for ages. These reptiles have gotten a bit of a bad reputation - and there are many myths associated with them. World Snake Day is celebrated every year on July 16 to raise awareness about the different types of snake species and the important role they play in maintaining ecological balance. Did you know, for example, that there are over 3,500 species of snakes in the world, but only about 600 of them are venomous. This and other such facts are what animal welfare organisations want the public to know in order to fight common misconceptions surrounding snakes.

On World Snake Day, take a look at some of the strangest snakes that exist on our planet and learn more about them:

Langaha madagascariensis, also known as Malagasy leaf-nosed snake, can grow up to 1 meter in length. While males are dorsally brown and ventrally yellow with a long tapering snout, females are mottled grey with a flattened, leaf shaped snout https://t.co/0z7MxeZMUNpic.twitter.com/2hDWffQqdB

These odd-looking snakes are endemic to the island of Madagascar, which means they are not found anywhere else in the world. They get their name from their pointed, leaf-shaped snouts. In females, these snouts are jagged, while males have long and tapered noses.

Is your #Movember ‘stache as stylish as the handlebar mustache on a tentacled snake? It's actually a sensory mechanism! pic.twitter.com/rWGVfGND

Tentacled snakes are the only species of snake to possess twin "tentacles" on the front of its head. These aquatic snakes use the tentacles to catch fish and are primarily found in the waters of South-East Asia.

While they may look like tiny dragons come to life, hairy bush vipers are a venomous species of viper endemic to Central Africa. Their extremely keeled dorsal scales give them a bristly appearance - and they are also known as rough-scaled bush viper and spiny bush viper.

Rainbow snakes are large, nonvenomous snakes that get their name from their beautiful colouring. Highly aquatic, this snake is found in North America and is rarely seen due to its elusive nature.

It's raining snakes…hallelujah? Like many snakes in the Chrysopelea genus, the Sri Lankan flying snake can glide through the air by propelling itself from tree branches and flattening its body by splaying its ribs, creating a shape similar to a frisbee. pic.twitter.com/yIZetp1HqV

An airborne snake may be the stuff of nightmares, but luckily these snakes don't actually fly. According to National Geographic, there are five recognised species of flying snake, spread out across South-East Asia. These snakes glide from one tree to another "using the speed of free fall and contortions of their bodies to catch the air and generate lift."