The Burmese python is one of the five largest snake species in the world. 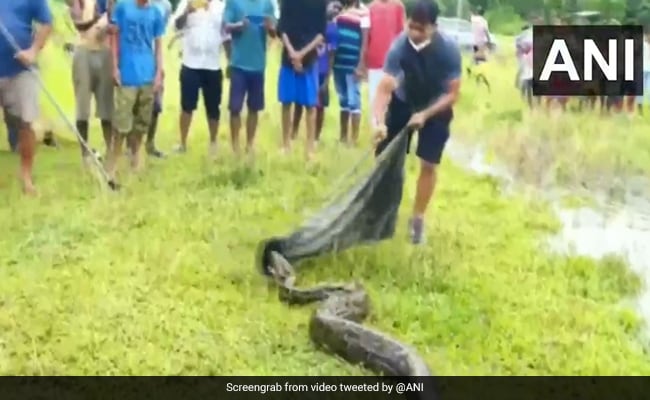 A 16-foot Burmese python was rescued in Assam.

A huge Burmese python was rescued and released into a forest in Assam on Saturday. Hair-raising footage shared by news agency ANI shows the python - which is one of the largest snakes found in India - being captured and bagged by an animal rescuer as a crowd of spectators watches the scene.

The rescue took place in the Borghat Chapanala area of Assam's Nagaon district. According to ANI, the Burmese python was spotted while devouring a pet goat in the village and brought under control. The animal rescuer who captured the snake said that it weighed 38 kilograms and measured a whopping 16-feet in length.

A crowd of villagers can be seen watching the massive snake being captured in the video shared on Twitter. Take a look at the video below:

#WATCH A Burmese python was rescued from Borghat Chapanala area in Nagaon district yesterday. It was later released in Swang reserve forest. #Assampic.twitter.com/c8yGRfIZd3

Since being shared on Twitter two days ago, the video has collected over 32,000 views and several stunned comments.

After being captured, the snake was released in the nearby Swang Reserve Forest under the supervision of the Forest Department.

The Burmese python is one of the five largest snake species in the world. Until 2009, it was considered to be a subspecies of the Indian python, but is now recognised as a separate species.

According to the Animal Diversity Organisation, the Burmese python is typically thought to range from Myanmar eastward across southern Asia through China and Indonesia. It can grow to lengths of about 25 feet and weigh as much as about 137 kilograms. It kills its prey by constriction.

Saved By The Smartphone: Bullet Bounces Off Motorola With Hulk Cover