Supertech Noida Twin Towers: The nearly 100-metre tall twin towers in Noida's Sector 93A are scheduled for demolition on August 28 in pursuance of a Supreme Court order that found the structures had come up in violation of building norms. 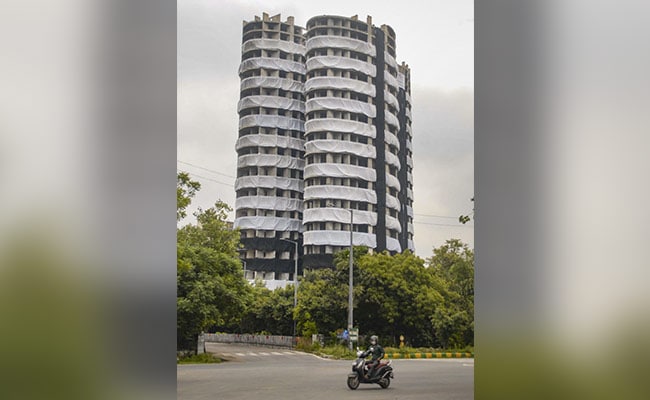 An FIR or police case has been lodged against three former chief fire officers (CFOs) of Gautam Buddh Nagar over alleged irregularities in providing no objection certificate to Supertech's illegal twin towers in Noida.

The FIR has been lodged at the Phase 2 police station on the complaint of a current fire department official in the wake of an inquiry conducted by the Deputy Inspector General of Police, Fire Service Headquarters (Lucknow).

The nearly 100-metre tall twin towers in Noida's Sector 93A are scheduled for demolition on August 28 in pursuance of a Supreme Court order that found the structures had come up in violation of building norms.

"An inquiry was conducted into the Fire Department's no objection certificate to Supertech Limited which was allotted the housing plot number- GH0-04 in Sector 93A in which the officers were found guilty.

"Therefore it is requested that according to the report dated April 29, 2022 of the inquiry committee constituted under the chairmanship of DIG Fire Service, in the context of the irregularity in the issue of fire clearance certificate, lodge an FIR under appropriate laws against Rajpal Tyagi, IS Soni and Mahavir Singh," the FIR stated.

The three former CFOs have been booked under Indian Penal Code section 217 (public servant disobeying direction of law with intent to save person from punishment or property from forfeiture), according to the police.

Further legal proceedings in the case, lodged on Sunday, are being carried out, police officials said.