Panic Buying In Noida After UP Announces Sealing Of Virus Hotspots

As people rushed to the shops, the administration cautioned the public against panic buying and assured home delivery of essentials. 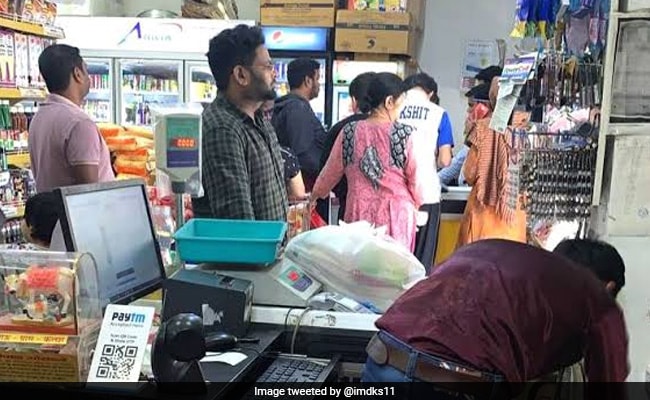 People in certain pockets of the city thronged shops to stock up on food items on Wednesday soon after the Uttar Pradesh government announced that COVID-19 hotspots in the state will be completely sealed till April 15.

As people rushed to the shops, the administration cautioned the public against panic buying and assured home delivery of essentials.

Gautam Buddh Nagar is among the 15 districts in UP where hotspots (areas/clusters that have reported coronavirus cases) will be sealed till April 15, while the remaining areas will remain under lockdown (restricted outdoor movement of people), according to officials.

Gautam Buddh Nagar, adjoining Delhi in western UP, has recorded 58 positive cases of coronavirus so far, while 10 of these patients have been cured and discharged from hospitals, according to officials.

As false rumours of the "entire district" being sealed spread during the afternoon, several people rushed to their nearby shops, kiosks and vendors to buy vegetables, milk, fruits and other grocery items in large quantities, according to eye-witnesses.

"I could see from my balcony at least a dozen people on one vegetable kiosk, similar number of people on another outside my society gate."

"A vegetable vendor with a mobile cart had also come there and within minutes there were several people buying items from him too. I have not seen this happen during this lockdown period. The panic is palpable and social distancing has gone for a toss," Ankur Saxena, Sector 76 resident, told PTI.

Similar scenes were witnessed in other areas of Noida including urban villages.

"People were buying 10-15 packets of milk... some people had come along with their domestic helps to carry the large amount of stuff they were buying," Khusro Ather, a resident of Sector 41, said.

Saloni Mehta, a Sector 21 resident, said she went along with her son to the Mother Dairy kiosk in her colony where they witnessed long queues of people waiting to buy essentials.

"The workers at Mother Dairy kept telling people that their store would remain open like usual but still people paid no heed to their appeal and kept stocking up items. No social distancing being practised now," Ms Mehta told PTI.

The district administration appealed to the people to avoid panic buying and assured them that home delivery of essential commodities would be ensured in the sealed hotspots.

"Dear residents, no need for panic buying. Identified hotspots shall be sealed and home delivery of essential commodities and services shall be available at all places in the district. We shall take strict action against rumour mongerers/spreaders," District Magistrate Suhas LY said in a brief statement.

Details on the hotspots identified across Noida and Greater Noida were awaited by the time this report was filed.