The decision comes against the backdrop of Tuesday's incident in which the pathway of a road overbridge collapsed on to WR's tracks, south of Andheri station, injuring five people, and disrupting train traffic for almost the whole day. 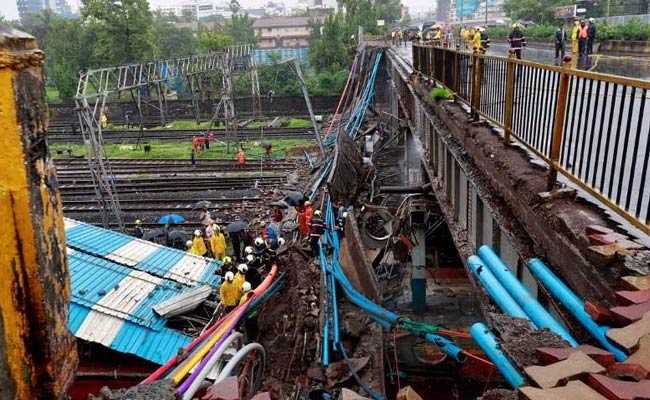 The Brihanmumbai Municipal Corporation along with Western and Central Railways have decided to form 10 teams to inspect 445 railway bridges in the city.

The decision comes against the backdrop of Tuesday's incident in which the pathway of a road overbridge collapsed on to WR's tracks, south of Andheri station, injuring five people, and disrupting train traffic for almost the whole day.

A meeting was held at the BMC headquarters today which was chaired by civic chief Ajoy Mehta and was attended by CR general manager D K Sharma and his WR counterpart AK Gupta apart from the divisional managers of both the railway zones.

"During the meeting, a decision was taken to form 10 teams comprising BMC and Railway officials and experts from the Indian Institute of Technology to assess 445 structures passing over railway tracks in Mumbai," said CR chief spokesperson Sunil Udasi.

Mr Udasi informed that the audit of these structures will start from tomorrow and bridges like Elphinstone Bridge, Lokmanya Tilak Bridge will be taken up first.

The CR chief spokesperson added that such joint meetings, with civic officials, would be held every month.

Earlier on Tuesday, Railway Minister Piyush Goyal, after visiting the site of the bridge collapse, had announced that audits would be carried out of these structures.

"A joint safety audit will be conducted by the Railways, BMC and IIT-Bombay of the 445 ROBs, foot overbridges (FOBs) in Mumbai in order to improve commuter safety," Mr Goyal had said.

The Commissioner of Railway Safety, investigating the incident, today invited witnesses to the incident to have their statements recorded.

A senior WR official said that several railway staffers, as well as common citizens, had recorded their statements as part of the probe.

The CRS' report on the incident is expected to be submitted in 15 days time.