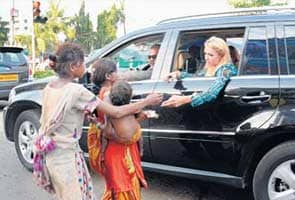 Mumbai: Paris Hilton found her benevolent side when she spotted a beggar woman with a baby in her arms when her car was zipping past Andheri. She slowed down and handed over a $100 note to the beggar woman. Never having seen such a note, and clearly unaware that she was holding close to Rs 5,000 in her hand, all the poor woman could ask our photographer Satyajit Desai, was 'Iska chhutta milega kya? (Can I get change for this?)'

The American socialite is in the country on a three-day trip to launch her stores and new line of bags. During her visit to the Inorbit Mall in Malad, a northern suburb of Mumbai to launch her bag store, she was greeted by hundreds of fans.

"Wow! Thousands and thousands (sic) of people here at Inorbit Mall for my PH purse launch! Love my fans in India. What an amazing turnout...Everyone is so friendly and sweet," Paris tweeted.

Promoted
Listen to the latest songs, only on JioSaavn.com
The 30-year-old was sporting a Monisha Jaisingh blue dress and interacted with her fans at the mall. She had her picture taken with many and even signed bags for a lucky few.