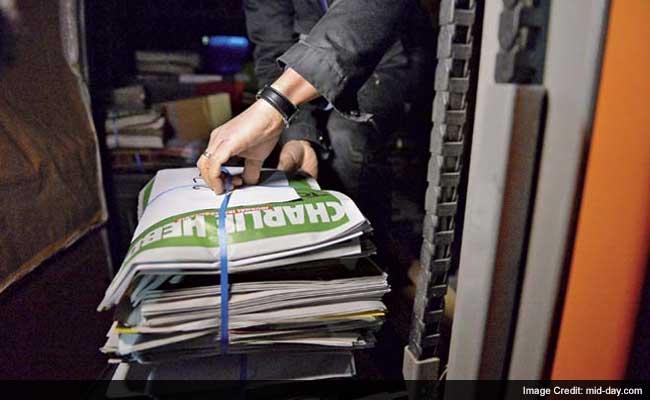 The first edition of Charlie Hebdo published after the attack on January 7, which killed 12 people, had a print run of seven million, up from the usual 30,000. File pic/Getty Images

In an act that has caused much surprise and alarm, the JJ Marg police have booked a newspaper vendor for selling the January 17 issue of the Urdu daily Avadhnama, which carried a photo of the cover of the French magazine Charlie Hebdo with the controversial cartoon of Prophet Mohammed.

In an act that has caused much surprise and alarm, the JJ Marg police have booked a newspaper vendor for selling the January 17 issue of the Urdu daily Avadhnama, which carried a photo of the cover of the French magazine Charlie Hebdo with the controversial cartoon of Prophet Mohammed.

Legal experts and newspaper vendors across the city said they were unhappy with the action taken by the police and wondered how a vendor could be held responsible for the content in a newspaper. The complainant has, however, stated that the vendor knew and understood Urdu and knew about the article and, thus, should have refrained from selling the newspaper.

Several FIRs had also been filed against the newspaper's editor, Shireen Dalvi, who said yesterday that she was being hounded (see box). The Mumbai edition of Avadhnama was shuttered following the controversy.

'Sold it knowingly'
When mid-day spoke to officials from JJ Marg police station, they said that the case had been filed because the vendor sold copies of the newspaper knowingly. Off the record, however, some police officials admitted that it had been registered due to pressure from members of the community.

Senior Police Inspector Anil Madvi of JJ Marg police station said, "A case has been registered against the vendor based on a complaint by Riyaz Chale (committee member of a masjid in South Mumbai). We have registered the case under Section 295 (Injuring or defiling place of worship with intent to insult the religion of any class) of the IPC.

We have not made any arrests and further investigations are on." A source from the police station, however, said, "There was outrage after the incident and there was a lot of pressure from the community to file a case against the vendor. They alleged that the vendor understands Urdu and knew about the front-page article 'against Prophet Mohammed'.

So, the vendor should have not sold the newspaper that day, but he did. We initially refused to take the case as no such case can be filed against the vendor, but there was a lot of pressure on us and the FIR was registered to control the situation."

Promoted
Listen to the latest songs, only on JioSaavn.com
Additional Commissioner of Police (South region) Krishna Prakash said, "Based on the complaint, an FIR has been registered. The complainant has alleged that despite knowing the language and the fact that the circulation of the said newspaper would hurt religious sentiments, the vendor went ahead and sold the newspaper."

When he was asked whether the vendor could be held accountable for the news content, Prakash said, "The matter is being investigated and we have not arrested anyone in the case so far."