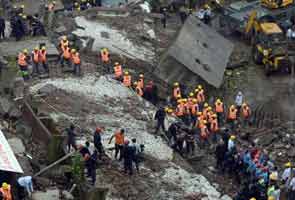 File photo: Rescuers search for survivors in the debris of the collapsed building.

Mumbai: The death toll in the Mazgaon building collapse has risen to 61 while 32 others are injured. Eight more bodies recovered from the debris on Sunday morning, authorities said.

After nearly 48 hours of efforts, the combined rescue operations were called off early on Sunday as the possibility of finding more bodies was ruled out.

Among those who died is 30-year-old journalist Yogesh Anant Pawar, who worked for the Marathi daily Sakal and his father. Originally from Jaitapur in Ratnagiri district, Yogesh had come to Mumbai to work as a journalist. While Yogesh's father's body was pulled out earlier, his body was pulled out on Saturday afternoon. Santosh Kamble, Yogesh's brother-in-law told reporters, "He used to live with his father here. His mother, his brothers and his sister have arrived from the village."

Situated near the Dockyard Road in south Mumbai, the 33-year-old building was owned by the BrihanMumbai Municipal Corporation or BMC and served as its staff quarters.

Housing around 21 families, it collapsed around 5.45 am on Friday, catching a majority of the sleeping residents unaware, the official said.

Mumbai police arrested the proprietor of a marquee decoration firm, who had allegedly carried out illegal modifications on the ground floor of the building. He has been booked for culpable homicide not amounting to murder and has been sent to police custody till Tuesday.

Last month, a BMC team surveyed the building and recommended urgent repairs after shifting the families living there.

Promoted
Listen to the latest songs, only on JioSaavn.com
But that is hardly any compensation for those who have lost everything they had. This is the seventh building to have collapsed in the last six months in Mumbai and Thane and hundreds of lives have been lost. But the most important question is, with nearly 950 very dangerous buildings in Mumbai alone, how many more collapses will it take for authorities to act?