The victim's body was recovered from a septic tank in her locality in Nehru Nagar, the National Human Rights Commission said, quoting reports. 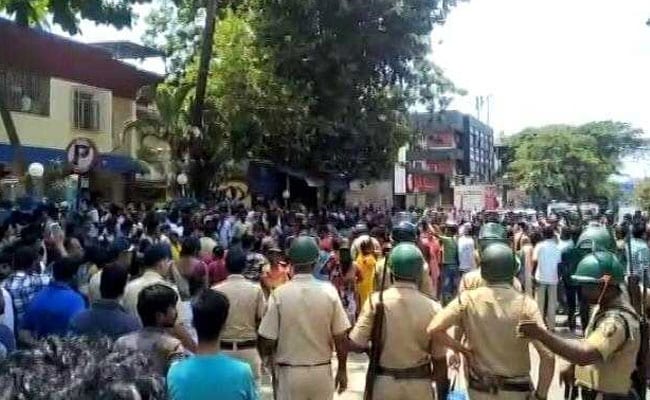 Locals blocked the road in front of Juhu Police Station to protest against the alleged rape and murder.

The National Human Rights Commission (NHRC) Monday issued notices to the Police Commissioner of Mumbai and Maharashtra's Director General of Police over a report that a nine-year-old girl, who had gone missing on April 4 from a slum in Juhu was found murdered two days later.

The victim's body was recovered from a septic tank in her locality in Nehru Nagar, the NHRC said, quoting the report.

Preliminary medical reports have reportedly confirmed that she was raped and murdered, it said.

"The NHRC has taken suo motu cognisance of a media report that a nine-year-old girl, who had gone missing on April 4 from Nehru Nagar slum area of Juhu Mumbai was found murdered on April 6," the rights panel said in a statement.

The Commission also expects to have a report giving details of the mechanism adopted by the police authorities to address the issue more effectively, it said.

According to the media report, a similar incident had taken place in JJ Marg area about one-and-a-half year ago.

The NHRC observed that it seems the area lacks proper patrolling and monitoring by the police authorities.

"The culprit in the instant case, has a criminal background as he was reportedly arrested by the police in the year 2013.

"The local police officials are expected be vigilant about suspicious activities of these anti-social elements so that such heinous crimes could be averted. The right to life and dignity of the innocent victim has been grossly violated," the Commission said.

According to the media report, carried on Sunday, the mother of the victim has stated that the girl had gone to get a packet of tea after which she disappeared.

A missing complaint was lodged with the details about the location and uniform she was wearing. The police authorities have arrested the suspect with whom the girl was last seen by some people, the statement said.