Mumbai building collapse: Three teams of the National Disaster Response Force, joined by residents of Dongri, worked through the night to remove blocks of broken concrete and bricks

Dongri building collapse: Rescuers are still digging through the rubble in the south Mumbai area

Rescuers are still digging through the rubble of a decades-old four-storey building in south Mumbai's crowded Dongri area that collapsed on Tuesday morning. Fourteen people have been killed and many more are feared trapped. Nine people - including two children - have been rescued.

Three teams of the National Disaster Response Force, joined by residents of the south Mumbai neighbourhood where several old buildings stand cheek by jowl, worked through the night to remove blocks of broken concrete and bricks using portable power tools.

Heavy machines could not reach the collapsed building on Tuesday as the lanes - with overhead wires dangling - were too narrow for them to navigate. The area was also flooded in heavy rain in the past weeks.

Residents formed a human chain to pass down with their bare hands small debris like wooden blocks and bricks towards the outer area of the neighbourhood.

"We have given permission to redevelop that area... We will know after investigation if the redevelopment initiative was delayed. Right now we are focusing on rescuing trapped people," Maharashtra Chief Minister Devendra Fadnavis told reporters on Tuesday.

He said Rs 50 lakh will be given to each of the families of those who died, and Rs 50,000 will be given to the injured and the government would take care of their medical expenses, news agency ANI reported today. 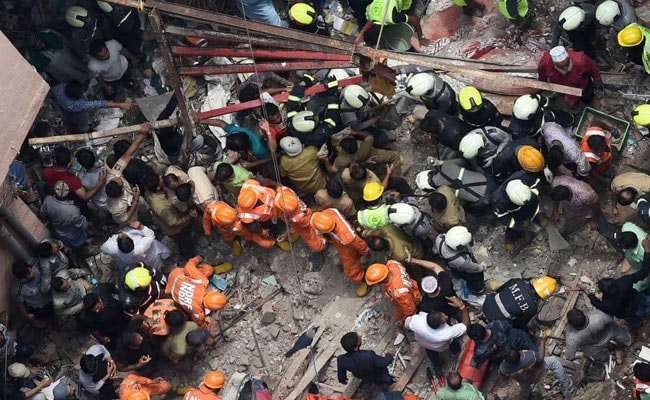 Heavy machines could not reach the collapsed building as the lanes - with overhead wires dangling - are too narrow for them to navigate.

The collapsed structure, built 40 years ago, which the Maharashtra Housing and Area Development Authority says was illegal, is right next to the 100-year-old Kesarbai building in south Mumbai's thickly populated Dongri area, home to many families and had been designated a "C1 building" by Mumbai's civic body in 2017 - which means it was marked for evacuation and demolition after a safety audit. Yet, it was left untouched.

The next door Kesarbai building, also marked "C1", is maintained by the MHADA, and is also dilapidated and in need of urgent repairs. Every monsoon, the structures look close to collapse.

Mumbai Building Repairs and Reconstruction Board Chairman Vinod Ghosalkar told news agency IANS on Tuesday that the building had been handed over for redevelopment to BSB Developers, which had not started work. 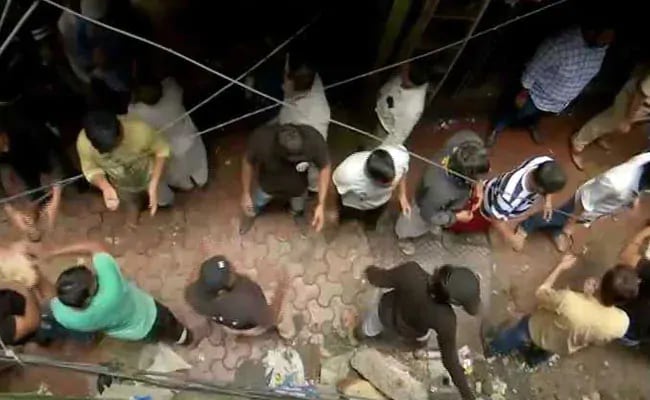 Dongri building collapse: Residents and rescue personnel form a human chain to bring out debris from the collapsed building in south Mumbai

A man who used to live at Dongri alleged the Brihanmumbai Municipal Corporation - India's richest civic agency - is slow on allowing people to repair their old homes in the area. "I applied for permission several times, but the BMC delayed it. All of this (building collapse) wouldn't have happened if they had allowed us to repair our own building. We don't want to wait for them. We will use our own funds," the man told NDTV, looking at the rubble that was once a building he recognised well.

Building safety is a major issue in Mumbai, one of the world's most crowded cities next to Dhaka in Bangladesh, according to the World Economic Forum.

In May, the civic agency BMC in the country's financial and entertainment hub had identified 499 buildings as "dangerous"; it was 619 last year.