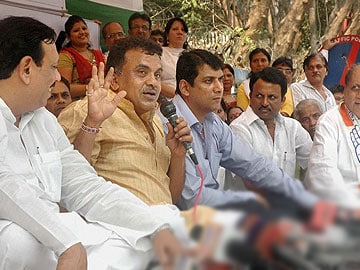 Congress MP Sanjay Nirupam interacts with media during a protest against the price hike in electricity bills, outside Reliance Energy office in Kandivali in Mumbai

Mumbai: Congress MP Sanjay Nirupam began an indefinite hunger strike in Mumbai today to demand that power tariff be reduced in the city. Earlier this week, electricity prices were cut by nearly 20% across Maharashtra, except in Mumbai.

Mr Nirupam is holding his protest fast outside the Kandivali West office of Anil Ambani-owned Reliance Energy, the power company that provides electricity in his Mumbai North constituency.

"I am fasting as all other doors before us are closed," he said and announced that he would continue his agitation till his demand was met.

"I wrote to the chief minister that like in Delhi, power tariff should be cut in Mumbai too. The chief minister responded positively. I am told that next week, decision will be taken for Mumbai. But it will be a subsidy. The government will pay for Reliance's loss. But why should the government alone bear the entire loss? Reliance also should share the burden. It's a fight for 26 lakh consumers," he added.

Last Monday, Mr Nirupam and MP Priya Dutt led hundreds of Congress workers in a protest at the same spot. Mr Nirupam and Ms Dutt, who represents the North West constituency in Mumbai, have been demanding a reduction in electricity tariff like the one announced by the Aam Aadmi Party government in Delhi. Their party, the Congress, leads the coalition government in Maharashtra.

Reliance Energy says reduction in power tariff is the prerogative of the Maharashtra Electricity Regulatory Commission or MERC. The company has forwarded the MPs' demand to the Maharashtra government, which has already formed a committee to look into the matter.

Mr Nirupam has alleged that the MERC "is not transparent and dances to the tunes of private power companies to benefit them."

Promoted
Listen to the latest songs, only on JioSaavn.com
Besides Reliance Energy, BEST, a government supplier, and Tata Power also provide electricity in Mumbai.