Special Advisory for Kolkata Sex Workers to Keep Ebola Away 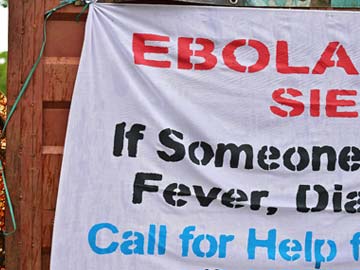 A poster explains how to fight Ebola outside a government hospital in Kailahun, which along with Kenama district in Sierra Leone is at the epicentre of the world's worst Ebola outbreak.

Kolkata: Sex workers in Sonagachi, Kolkata's largest red light area, have been asked not to entertain customers from Africa, who are regular visitors to the place, in the wake of the Ebola outbreak in West Africa.

Durbar Mahila Samanwaya Committee, a forum of 1,30,000 sex workers in West Bengal, has warned the sex workers that they might come in contact with infected persons.

"We have requested the sex workers not to entertain people from African nations as it can be a life risk for them if they get infected by the highly contagious Ebola virus which is causing havoc in some West African countries," said a member of the DMSC.

Durbar is presently training and providing classes to sex workers to identify the signs of an Ebola-affected person.

"According to WHO guidelines, transmission of the virus requires close contact with body fluids such as sweat, saliva and the cough of an infected person, and also body contact. So we are training the sex workers on how to identify the symptoms," said Samarjit Jana of Durbar, who is looking after the training programme.

Mr Jana says that the training schedule forms a part of the regular training programme in which sex workers are instructed about sexually transmitted diseases.

Asked if the guideline applied to all foreigners who showed such symptoms, Mr Jana said, "This is for the sex workers to decide. We can request them for their own safety and we have told them to be careful."

According to the latest WHO update, 128 new cases of Ebola virus disease, as well as 56 deaths were reported from Guinea, Liberia, Nigeria, and Sierra Leone between August 10 and 11, bringing the total number of cases to 1,975 and deaths to 1,069.

Promoted
Listen to the latest songs, only on JioSaavn.com
The Ebola virus is highly contagious, but is not airborne.

Mr Jana said that the training programme, which started this week in Sonagachi, would be extended to other red light areas in the city as well as the entire state, especially in port and border areas.