Kolkata: Serial, based on Taslima Nasrin's script, runs into trouble 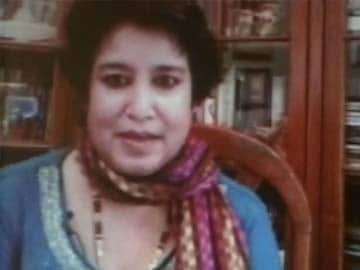 Taslima Nasrin speaking to the media via video conference

Kolkata: A TV serial written by controversial Bangladeshi author Taslima Nasrin has run into rough weather. Minority groups have demanded that the serial, which was scheduled to go on air from tonight on a Bengali channel, be shelved as it contains objectionable content, and have written to Chief Minister Mamata Banerjee. The Kolkata Police has now verbally advised the TV channel not to air the serial.

Called 'Dusahobas,' the serial is written exclusively for television by Ms Nasrin, and was scheduled to air on Bengali channel Aakash Aath from tonight. Last week, Ms Nasrin spoke to the media in Kolkata about the serial via a video conference from Delhi.

"I am very grateful to Channel and Ashok Suranaji that they are bringing me back to Kolkata. A writer lives through her works. If my works are published and publicized, then I will be alive in Kolkata. My physical presence is not necessary," she said. Ms Nasrin was forced to leave Kolkata six years ago after trouble erupted over one of her books.

Earlier, a minority group called the 'Milli Ittehad Parishad' had objected to hoardings and promos for the serial that featured Ms Nasrin's photos and voice. They were later withdrawn. But on Tuesday, they wrote to the channel, demanding the serial be shelved.

"We have come to know from reliable sources that there are one or more than one such objectionable scenes which will hurt the Muslim community so we wrote the letter please stop this nonsense thing," said Abdul Aziz, secretary of the Parishad.

Promoted
Listen to the latest songs, only on JioSaavn.com
In a statement, the channel said "Although Aakash Aath is willing and is ready to commence the telecast of Dusahobas today at 10pm as was envisaged but due to reasons beyond the purview and control of Aakash Aath we may be forced to defer the telecast of this serial indefinitely. Please note that this serial was based on 'Women Empowerment' and had nothing to do with any religion or community whatsoever. Kindly bear with us and keep watching the channel for further updates on this serial."

Serial producer Eshita Surana told NDTV that the police have "suggested" to them to stop the telecast or the channel would be responsible for any trouble over it. Ms Surana pointed out that Ms Nasrin's books are not banned and still selling in Kolkata. Given the stand from minority groups and the state government's unease about repercussions, 'Dusahobas' may ultimately not see the light of day.