The Kolkata beef festival was scheduled to be held on June 23. 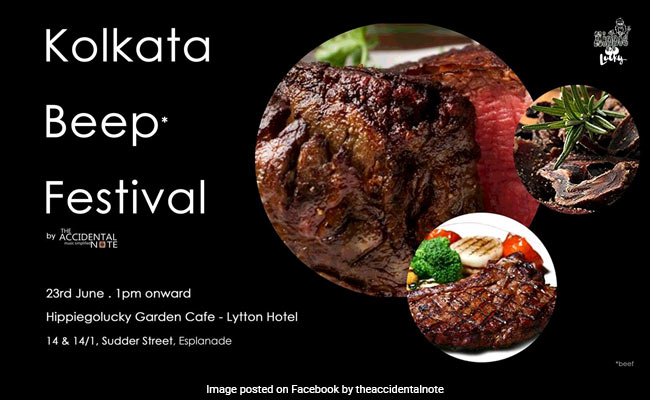 A beef food festival in Kolkata, scheduled for later this month, has been called off after a barrage of threat calls and hate messages, the organisers said.

The event, originally titled "Kolkata Beef Festival", was renamed "Kolkata Beep Festival" after the organisers on Thursday said they received multiple threat messages because of having "beef" in the title of the food festival.

The organisers were planning to go to the police on Friday to file a complaint. But on Thursday night, one of them got nearly 300 calls, "a lot of them to show support, but a lot of them were direct threats", they said in a Facebook post.

"We are afraid, because everything has been blown out of proportion somehow. Things are not in our control anymore. For all of these reasons, the Kolkata Beep* Festival stands cancelled," The Accidental Note, a Kolkata-based event management company, said.

The "Kolkata Beep Festival" was scheduled to be held at a restaurant in south Kolkata on June 23. The venue was changed to a hotel in central Kolkata. Guests would have had to pay for the food and drink they bought.

"Even though we planned for this to happen after the elections, to avoid political tension, we couldn't avoid it. If it was just political tension, and if we were sure that we can still provide a safe conflict free food festival that allows everyone attending to enjoy, we would've gone ahead with it," the organisers said.