In A First, Bengal Government To Observe Death Anniversary Of Syama Prasad Mookerjee

The CPI-M saw this as yet another instance of the "collusion" between the Trinamool Congress and the Bharatiya Janata Party (BJP). 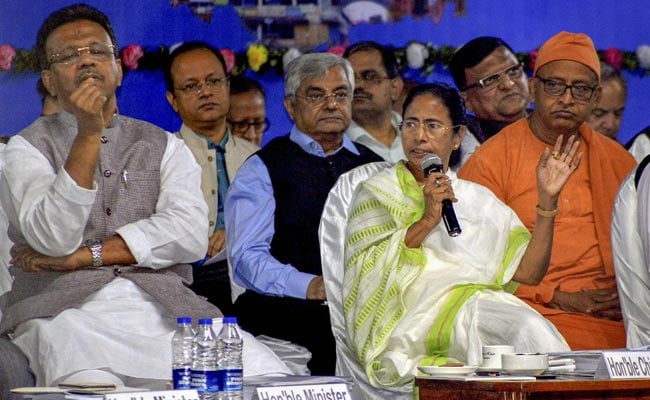 While the Communist Party of India-Marxist (CPI-M) saw this as yet another instance of the "collusion" between the Trinamool Congress and the Bharatiya Janata Party (BJP), the latter said the Mamata Banerjee government was seeing the ghost of BJP everywhere.

The Jana Sangh is regarded as the precursor of the BJP.

West Bengal ministers Firhad Hakim and Sovandeb Chattopadhyay would attend the programme before Syama Prasad Mookerjee's bust at south Kolkata's Keoratala crematorium, according to the formal invite issued by the Information and Cultural Affairs Department.

"It is our tradition to pay respect to great personalities. We believe in that culture," said Trinamool leader and Kolkata Municipal Corporation chairperson Mala Roy.

The bust was vandalised by a group of Left radicals in March in protest against the pulling down of two statues of Russian communist revolutionary Vladimir Lenin in Tripura, allegedly by BJP-RSS activists.

The state government arrested the Left radicals and installed a new bronze bust of the late leader.

"The bronze bust will be unveiled on Saturday. We will pay our respects then," said Ms Roy.

Sovandeb Chattopadhyay said Mookerjee would never have approved the BJP's communal agenda for the sake of getting political mileage.

"The way BJP is bringing religion into the political arena, and indulging in the politics of polarisation to create an atmosphere of hatred, and gain political mileage, I don't think Syama Prasad would have approved all this," he said.

BJP leader Pratap Banerjee was sarcastic. "Mamata Banerjee is seeing the ghost of BJP everywhere. This is the reason they have suddenly turned big admirers of Syama Prasad," he said.

Promoted
Listen to the latest songs, only on JioSaavn.com
CPI-M leader Chayan Bhattacharya slammed the Trinamool. "We never had any doubt about some understanding between the BJP and the Trinamool. The state government indirectly fans communalism. This has come into the open now."