Debate Over Aligning With Congress At CPI-M Plenum 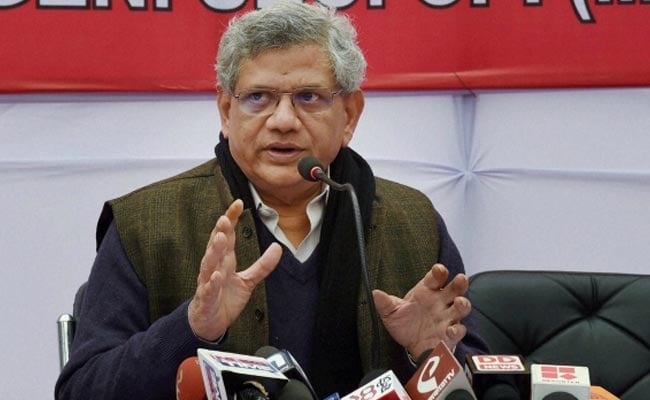 Kolkata: The debate over aligning with Congress featured majorly at the ongoing CPI(M) state plenum and party general secretary Sitaram Yechury today said there is a need to put up an united fight with all the "secular and democratic forces" to resist the "terror" of ruling TMC.

"We have already made our stand clear that in order to resist the fascist attack of TMC there has to be the broadest possible unity of secular and democratic forces. We need to fight along with Congress against these terror tactics and undemocratic methods of forcibly taking over elected bodies," Mr Yechury told reporters.

The two-day state plenum began yesterday to assess the situation and find ways to strengthen the party organization.

Several leaders at the plenum have raised questions whether it was ethical for Bengal CPI(M) to align with Congress violating the CPI(M) official political line adopted in the party's last congress.

Pro-alliance CPI(M) leaders have countered the move saying had the party not opted for alliance with Congress, the assembly result would have been much worse and CPI(M) score would have come down to single digits.

A large section of Bengal CPI(M) state committee leaders in the presence of the party's top leadership said, in order to fight against the "brazen attack" of TMC and "communal politics" of BJP, the broadest possible unity is needed and it cannot be achieved without 'secular' Congress in it.

While discussing the organizational lacunae in the party, leaders at the CPI(M) plenum accepted that the quality of party membership and cadres have dropped significantly over the years.

Even CPI(M) state secretary Surya Kanta Mishra and Mr Yechury concurred. "This tendency needs to be checked," they said.

Promoted
Listen to the latest songs, only on JioSaavn.com
According to a senior state committee member, drawing up of a new set of criteria for selection of new cadres has been discussed at the plenum.

"A proper background check should be done regarding family, financial dealings and whether the person has any criminal record. Rotten elements have to be removed from the party," he added.